HSP is an immune mediated condition in which the body’s own immune system causes damage to its own blood vessels. The exact cause is unknown but many cases of HSP have been observed to occur after viral infections such as a cold or flu.

What are the symptoms of HSP?

The rashes are often clustered around the legs (shins) and buttocks. It may appear as rashes ranging from red or purplish small dots to large patches of bruises. These rashes can be seen at times over the arms, ears and face. Frequently, children may develop some swelling of the tissue around the rash (subcutaneous oedema). These painful swellings can occur around hands, feet, joints and even the scrotum or scalp.

Some children may experience arthritis or painful and swollen joints. The large joints are often affected. The swelling and pain often subside within 24 to 48 hours.

Inflamed vessels in the kidneys often cause a painless type of bleeding into the urine (haematuria) which can only be detected microscopically. These often resolve without problems though in rare cases, these can cause kidney impairment.

How is HSP treated?

There is no specific treatment for HSP. However, in some cases of serious skin, intestinal or kidney manifestations, steroids can help to alleviate these symptoms. However, steroids have not been proven to prevent kidney impairment if the kidneys are involved.

Anti- inflammatory medications (NSAIDs) can help to control symptoms of joint pain. These medications are however not a cure as HSP is a self-limiting disease which means it would eventually resolve by itself.

In the rare event of an obstruction of the intestines (due to intussusception), surgery may be required to relieve the obstruction.

HSP is not an infectious disease as it is not caused by any germs.

What are the long-term complications of HSP?

As mentioned, HSP is a self-limiting condition which usually gets better by itself. The majority of children recover without any long-term side-effects. Generally most children would recover by 2 to 4 weeks. However HSP can be prolonged in some cases and there are children who do get recurrent HSP episodes.

The most serious long-term complication from HSP is kidney damage and therefore children with HSP will need to have regular blood pressure checks and urine tests to monitor their kidney function. Fortunately, kidney damage from HSP is uncommon. 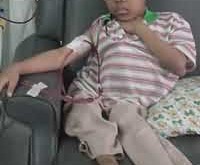