What is the urinary tract?

The urinary tract consists of two kidneys, the two ureters, the bladder and the urethra. 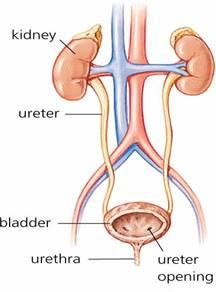 What is urinary tract infection (UTI)?

How common is urinary tract infection?

What are the risk factors for urinary tract infection?

Risk factors associated with UTI are :

Table 1 : Incidence of Urinary Tract Infection According to Age and Sex

Various organisms have been implicated such as :

How do I know I have a urinary tract infection?

The clinical presentation of UTI is quite variable, ranging from

Bacteriuria detected in the absence of symptoms does not warrant antimicrobial therapy except in specific settings. These include pregnancy, before surgery or instrumentation of the urinary tract and after renal transplantation. Treatment of asymptomatic bacteriuria in patients who are immunosuppressed because of transplantation other than renal (i.e. other solid organ or bone marrow) or because of neutropenia has not been well studied and is not currently recommended as standard practice.

3. Signs and symptoms of kidney infection :

You should consult a doctor. A medical history, physical examination and investigations have to be done.

How to obtain this sample?

Various tests are carried out on this sample to confirm the diagnosis.

2. Your doctor may request further tests such as blood tests look at your kidney function and to ensure that you are not diabetic.

3. Other investigations e.g. ultrasound may be required

What is the treatment of UTI?

In general, asymptomatic UTI does not require treatment. However, symptomatic infection requires antibiotics which can be given as an out-patient basis. Your doctor may request for admission if you are severely ill, cannot tolerate oral medication, or have complicating medical conditions for intravenous therapy.

Treatment with antimicrobial agents is not sufficient. The cause for the UTI has to be ascertained.

I am pregnant and I think I have a UTI? Please help.

There are major differences between the approach to UTI in pregnant women.

What is the prognosis of UTI?

Asymptomatic bacteriuria does not itself cause an increase in mortality.

A urinary tract infection can be recurrent (reoccurs after the completion of treatment) or relapsing (reoccurs during the course of the therapy).

Recurrent infections can lead to chronic pyelonephritis or to renal failure.

Liow: No ban on sale of nasi lemak