The date of gestation (pregnancy) is calculated from the first day of the last menstrual period. A term pregnancy is defined as those that reaches between 37 weeks to 42 weeks. Thus, premature or preterm labour is defined as labour that occurs before 37 weeks of pregnancy.

The cause of premature labour is unknown in the majority of cases. However, about 20% of cases are actually planned early deliveries. These are instances where there is a significant medical condition involving the mother and/or her baby/babies, which warrant an earlier delivery. Some examples includes cases of severe hypertensive disease or diabetes in pregnancy which may affect both the mother and her baby.

It is difficult to predict who will or when a mother will develop premature labour. However, there are factors that increases a woman’s risk. These risk factors includes;

The early signs and symptoms may be vague, such as lower abdominal or low back pain. The mother may also have regular tightening or painless contractions. However, actual signs of symptoms or premature labour are;

Premature birth is a major cause of newborn complications and death. The premature newborn is at risk of medical complications or problems related to the incomplete development of its organ systems. These problems may include difficulty with breathing, staying warm, feeding, as well as injury to the eyes, intestines, and nervous system among other things. The more premature the baby, the higher the risks and severity of complications. However, with medical advancement in intensive neonatal care, the outcome of premature babies is improving all the time.

The primary goal of treatment is to delay delivery and to allow the pregnancy to continue where possible. Where it is not contraindicated, medications to suppress the contractions may need to be given. Steroid injections should also be given to mothers between certain gestational age to promote the baby’s lung maturity and improve survival. When given time for the steroids injections to work, the incidence of some complications in premature babies would be reduced. The doctors managing the case should discuss the plan of management with the patient and her husband or partner.

Premature babies should be delivered in specialist hospitals with NICU (Neonatal Intensive Care Unit) facility. Sometimes, suppressing preterm labour to allow a patient to be transferred to a specialist hospital with NICU facility is advisable. This would also allow time for the steroid injections to work.

In specialist hospitals with good NICU facility, babies born after 32 weeks usually have good outcome. In general, the more mature the baby, the better is the outcome. However, those born less than 32 weeks or particularly if less than 1 kg at birth may have significant short term and long term medical complications.

Medications used to stop or suppress labour are called “tocolytic” agents. Some of these medications include nifedipine, atosiban and terbutaline. Tocolytic medications are intended to delay delivery or suppress labour for a short period of time, so the duration of usage is usually limited up to 48 hours. Magnesium sulphate may also be given if the pregnancy is less than 32 weeks to perfect baby’s brain.

Up to 50% of premature labour may naturally subside by itself with bed rest or with the use of tocolytics. Depending on various clinical factors, the mother may be allowed to go home or may need to remain in the hospital. If she is allowed to return home, then appropriate counseling and clinic follow-up need to be arranged. If she is allowed to go home, she should be advised to refrain from strenuous physical activities and to come to the hospital immediately if she develop signs and symptoms of labour again.

Dexamethasone will benefit a premature babies by lowering the risk of:

It is difficult to prevent premature labour as the cause is unknown in the majority of cases. It would be advisable to stop harmful habits such as smoking and the use of illicit/illegal drugs. There are some clinical evidence to show that progesterone supplements in the form of injection or vaginal gel can be offered to mother with a history of a previous premature birth, to prevent a recurrence of premature labour. Progesterone supplementation can be given between 16 and 26 weeks of pregnancy and continued until 36 weeks, however, there is no evidence that it is effective in women with no previous history of premature/preterm labour or in women with multiple gestations (e.g. twins).

False labour contractions (Braxton Hicks contractions) are tightening of the uterus that occur usually less than eight times in an hour or four times every twenty minutes. It is typically irregular and painless. It is not accompanied by bleeding or vaginal discharge. Generally, it resolves with rest. These painless uterine contractions are normal and do not increase the risk of getting premature labour. Unfortunately, sometimes it is difficult to differentiate between premature labour and false labour.  The mother is advised to seek medical opinion in clinics or the nearest hospital, if these contractions does not resolve or become more frequent and painful. The doctor or nurse may ask some questions and perform a simple pelvic examination to determine if a mother is having premature labour or just tightening. 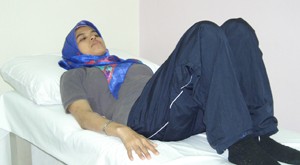