The following article provides public with background information pertaining to reproductive risks of radiation exposures to women who are pregnant and have questions about the risk of birth defects and miscarriage. As general rule, the sensitivity of a tissue to radiation is directly proportional to its rate of proliferation. Therefore, one could infer that the human fetus, because of its rapid progression from a single cell to a formed organism in nine months, is more sensitive to radiation than the adult. This inference has been derived from the results of experiments in animal models, and experience with human populations that have been exposed to very high doses of radiation (atomic bomb radiation at Hiroshima and Nagasaki in 1945, and to the fallout of the Chernobyl nuclear power plant explosion in April 1986).

However most radiation exposure events will not expose the fetus to levels likely to cause health effects for those who are concerned about radiation exposures they have had that might impact the development of the fetus and their risk of genetic diseases because of the radiation exposure. This is true for radiation exposure from most diagnostic medical exams as well as from occupational radiation exposures that fall within regulatory limits. Nevertheless, circumstances may arise when an expectant mother and her physician should have some concern. According to the Robert Brent (2014), “Every healthy woman without personal or a family history of reproductive or developmental problems begins her pregnancy with a 3 percent risk for birth defects and a 15 percent risk for miscarriage. These are background risks for all healthy pregnant women” (Health Physics Society, para 1).

Ionizing radiation is known to cause harm in mammalian organisms. The kind of electromagnetic radiation produced by x-ray machines, radioactive isotopes (radionuclides), and radiation therapy machines can be categorized as ionizing radiation. In addition to natural background radiation, you may be exposed to ionizing radiation causes from man made sources such as industrial or medical application. Ionising radiation is used widely in medical application such as Radiology, Radiotherapy and Nuclear Medicine. It is the job of medical specialist or medical officers to ensure that patients are only irradiated when the benefits of making a diagnosis outweigh the small risk from the radiation formerly known as justification concept. Parallel on that particular care need to be taken to avoid the exposure of women who are, or might be, pregnant.

In contrast to the ultrasound, which is used during pregnancy in antenatal screening and testing, does not use ionising radiation. Neither do MRI scans which are a type of scan often used to diagnose health conditions that affect organs, tissue and bone. Scans involving forms of non-ionising radiation are less of a health hazard than tests involving ionising radiation. The human embryo and fetus are particularly sensitive to ionizing radiation, and the health consequences of exposure can be severe, even at radiation doses too low to immediately affect the mother. However there are some research said, at the low dose levels used in diagnosis, the only adverse effect is an increase in the risk of malignant disease (cancer) occurring during childhood. The ‘natural’ risk of childhood cancer (for a child not exposed before they are born) is about 1 in 500 (“Tutor dan APA,” n.d.).

Malaysian Regulation (Basic Safety Radiation Protection 2010) under Atomic Energy Licensing Act (Act 304) had imposed the dose limit for occupational and public exposure to the fetus. Recommendations from International Commission on Radiological Protection (ICRP) for pregnant medical radiation workers whom may work in a radiation environment as long as there is reasonable assurance that the fetal dose can be kept below 1 mGy during the pregnancy. Nevertheless, not to worry, The National Council on Radiation Protection and Measurements and the American College of Obstetricians and Gynecologists both agree that the dose level can cause potential health risks to your fetus are not increased from most standard procedure using radiation below 50 mSv (which 1Gy = 1Sv). Palma Shaw et al. (2011) in theirs research said that 5mSv almost equal to 100 to 1000 fluoroscopic examinations of 5 minutes each per gestational month. However, potential health risks may increase for a few medical tests or combinations of tests that result in radiation doses that exceed 50 mSv, depending on the dose and on the stage of pregnancy.

Potential radiation effects vary depending on the fetal stage of development and the magnitude of the doses. According to the American College of Radiology, routine x-rays of a mother’s abdomen, back, hips, and pelvis are not likely to pose a serious risk to the child (ACR/RSNA, 2010). However, certain procedures (such as a computerized tomography [CT scan] or a lower GI fluoroscope exam) to the mother’s stomach or hips may give higher doses. If you are administered a radioactive drug (nuclear medicine), radioactivity in your urine or intestines could give a moderate dose to the fetus, and some compounds can cross the placenta as well. If you are a candidate for a therapeutic use of radiation from either machine produced radiation or a nuclear medicine treatment, this may be delayed until after pregnancy, or if urgent, special precautions should be taken to protect the fetus.

Very high radiation doses (for example, in survivors of the Japanese atomic bombings who were pregnant) resulted in some fetal abnormalities and neurological effects, but in diagnostic uses of radiation the doses are below these thresholds. Some have discussed possible risks of cancer appearing later from children irradiated in utero, but the chance of these effects occurring are very small and, if they exist at all, they are well below the natural occurrence rates for these cancers and even farther below the other normal risks of all pregnancies. There is no evidence that a child will be at a greater risk for birth defects from parental exposure to x-rays or radionuclide medical tests. Most diagnostic x-ray or radionuclide medical procedures do not result in a radiation dose that can be associated with any significant increase in risk. In the last century, the number of women exposed to medical radiation has increased, while the rate of birth defects and miscarriages is unchanged. The role of medical physicist as Radiation Protection Officer (RPO) in the hospital is important to evaluate the possible radiation dose and risk that might given to the fetus especially from higher dose procedure.

The most prominent question will be asked when an expectant mother undergo any radiation exposure situation is likely to be, “Is this safe for my baby?” To answer this question, the clinician must carefully choose words that will help a patient understand the real, the risks of exposure are very small. Physician together with the medical physicist need to calculate or estimate the dose and evaluate the risk assessment. Understanding of the risks, careful attention and planning, must be given to the parents’ potential emotional turmoil at the thought of placing their infant at any increased risk, however small. Most importantly, do tell your physician if you are pregnant or think you might be for many medical decisions, such as drug prescriptions and nuclear medicine procedures, as well as x-rays.

If you are pregnant, or think you might be, do not hold a child who is being x-rayed but when the situation requires be sure to ask for a lead apron to protect your reproductive organs. This is to prevent damage to your genes that could be passed on and cause harmful effects in your future descendants. Do tell your doctor about any similar x-rays you have had recently whenever an x-ray is requested. When a radiopharmaceutical is given as part of a nuclear medicine procedure, it spreads throughout the body. For the nursing mothers, some radiopharmaceuticals can enter the breast milk and be consumed by an infant. Therefore, to avoid unnecessary exposure of an infant to the radiopharmaceuticals, breastfeeding will have to be suspended for a short period of time after the nuclear medicine procedure depending on the type and amount of radiopharmaceutical used. If breastfeeding at the time of a nuclear medicine procedure, a woman needs to inform the radiographers or imaging staff before the procedure and seek advice from the nuclear medicine specialist as to when breastfeeding can resume. The facility where the woman is having the test or procedure will normally be able to provide advice concerning the possibility of expressing and storing breast milk before the procedure is carried out. Women due to undergo therapy with radioiodine may find it beneficial to stop breastfeeding 2–3 weeks before receiving therapy. This is because breast tissue that is producing milk will receive a higher dose of radiation than the breast tissue of a woman who is not breastfeeding. Again, specific advice needs be sought from the nuclear medicine specialist.

For the pregnant radiographers, in most cases they may safely perform procedures without the risk of fetal injury or death. In general, malformations only occur above a threshold dose of 100 to 200mGy during pregnancy. Palma Shaw et al. (2011) in theirs research, no risk of fetal or childhood effects has been found after preconception irradiation of either parent’s gonads. The employee can request an additional badge to monitor fetal radiation. This radiation monitoring is done in addition to the standard collar badge, and the dose should be reported monthly during pregnancy. All institutions are required to publish radiation safety standard operating procedures concerning pregnant operators. The pregnant radiographers may consider stepping away (ideally 2 metre) from the table, or even into the anteroom, during imaging runs. Doubling the distance between the radiographers and the radiation source will reduce the exposure by four. If the pregnant radiographers cannot step away from the table, movable lead shields should be used and placed between the x-ray beam and the operator. The principle of “as low as reasonably achievable” (ALARA) is an important practice in both pregnant and non_pregnant radiographers. As discussed, reducing time and distance from the radiation source is important. Also critical is the use of protective aprons. 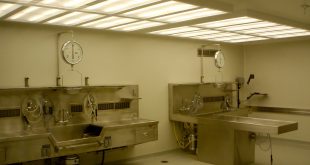