Polymerase chain reaction (PCR) is a relatively fast and simple laboratory technique that can detect a nucleic acid fragment by the amplification of small segments of DNA.

PCR is now a common and often necessary technique used in medical and biological research for a variety of applications such as DNA fingerprinting, detection of bacteria or viruses and diagnosis of genetic disorders. 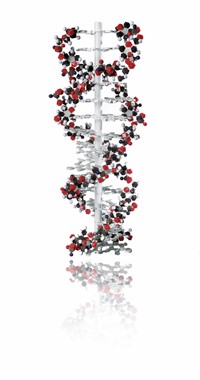 This technique is using Biochemical technology in molecular biology. PCR technology is also an important technique for research and development of new therapeutic and diagnostic strategies in improving the health and quality of life.

PCR has given a major impact on medicine particularly in accurately diagnosing diseases in human via DNA structure.

It is extensively being used in cancer research for malignant diseases such as leukemia and lymphoma.

PCR technology facilitates the DNA detection of pathogenic microorganisms that causing infectious disease to human. Thus, early detection will allow early treatment of patient and control of the disease from spreading.

Examples of the diseases that can be detected using this technique are Influenza, Tuberculosis, Leptospirosis and Toxoplasmosis

PCR is an important laboratory tool for clinical diagnostic tests of various infectious agents, including viruses, bacteria and parasites.

The implementation of this technique will provide high sensitivity, specificity, precision with speed. Hence, it is used as a new alternative for rapid detection of microorganisms as well as for the determination of multiple factors associated with antibiotic resistance.

Furthermore, PCR has transformed ways of how pathological studies being conducted which in turn has changed clinical practice. Its ability to define molecular alterations associated with disease of interest helps in better understanding of the pathogenesis of the disease thus guiding for more effective therapeutic measures to be instituted.

This technique is used for diagnosis of different diseases in the same sample. Multiplex PCR can detect different pathogens in a single sample by amplifying several DNA sequences.

This technique is carried out to increase the specificity of the amplified product for a second PCR with new primers due to the small amounts of the target. It is detected by using two sets of primers, involving a double process of amplification.

This type of PCR has been useful for diagnosis of RNA viruses, as well as for evaluation of antimicrobial therapy. It generates amplification of RNA by synthesis of cDNA (DNA complementary to RNA) that is then amplified by PCR.

Many types of samples can be analyzed for nucleic acids such as blood, tissues, fingernail scrapping, throat swab etc.

This technique shows high in sensitivity and specificity. High sensitivity refers to the target DNA/RNA sequence that can be detected in a very small amount of genetic materials. Whereas, specificity refers to a specific sequence of DNA which is amplified through controlled conditions.

PCR is considered as a fast technique compared with other methods to detect microorganisms such as bacteria, fungus or virus, which normally require isolation and culture using culture media or cell lines.

Moreover, PCR offers versatility due to the genetic sequences from various microorganisms that can be identified with the same reaction conditions for diagnosis of different diseases.

One of the disadvantages of this technique is that the percentage of probability towards contamination of other material, like human DNA or any inhibitor, is higher during amplification of nucleotide sequence.

Another disadvantage of the technique is the possibility of non-specific hybridizations which generate unsatisfactory results and could not be representative of the organism under study.

The main challenge of using PCR technique is the handling of mRNA sample especially with low concentration of mRNA, low stability in room temperature, sensitivity due to the action of ribonuclease and change in pH.