Polycystic ovary syndrome (PCOS) is a condition that may affect a women’s menstrual cycle, fertility and in some cases physical appearance. The commonest complaint among women with PCOS is menstrual disorder or irregularity, and this is largely due to hormonal imbalance and anovulation. The failure to ovulate regularly leads to problems with fertility or difficulty in getting pregnant. PCOS is also associated with higher circulating levels of male hormones or androgens in the body and this may lead to hirsuitsm or excessive facial hair growth, acne, and/or male-pattern hair thinning. However, it should be noted that excessive facial or body hair can also be genetic as seen in some races.

PCOS is a relatively common disorder affecting about 5 to 10 % of women in the reproductive age group.

A large majority of women with PCOS are overweight or obese and there is a higher risk of developing diabetes, obstructive sleep apnea and other long term health risks (see complications below). Women with PCOS should be screened for diabetes.

PCOS is one of the commonest cause of infertility or difficulty in getting pregnant. However, there are available medications that could induce regular ovulation and help them to conceive. 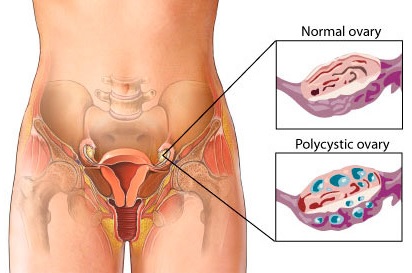 What are polycystic ovaries?

The cause of PCOS is still unknown. However, it may run in families. Women with PCOS has abnormal levels of the pituitary hormone luteinizing hormone (LH) and high levels of male hormones (androgens) which interfere with normal function of the ovaries.

In women with PCOS, multiple small cysts (4-9 mm in diameter) develop in the ovary. None of these small follicles are capable of growing to a size that would trigger ovulation. As a result, the levels of estrogen, progesterone, LH, and follicular stimulating hormone (FSH) become imbalanced.

Insulin is a hormone which regulates the level of glucose (a type of sugar) in the blood. Women with PCOS may not respond to insulin (known as insulin resistance) and this may result in higher levels of glucose. In response to this, the body produces more insulin. High levels of insulin may lead to weight gain.

The symptoms may vary in terms of severity. Some may only have mild symptoms, while others are more severely affected

The symptoms of PCOS may include:

Women afflicted with PCOS may have present with different signs and symptoms at different times. Some of the signs and symptoms are quite common among the general population, making it relatively difficult to diagnose. A diagnosis of PCOS is usually made when the women have any two of the following: 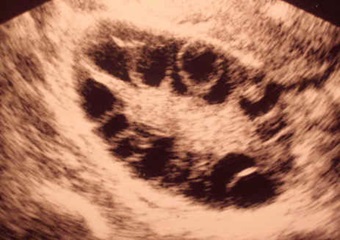 The management of women with PCOS need to be tailored according to the presenting signs and symptoms. Does she want to conceive? Is hirsuitsm a problem? Does she require treatment to prevent endometrial hyperplasia (abnormal thickening of the inner lining of the womb) or possible cancer of the womb?

Oral contraceptives – (OCs; with combined estrogen and progestin) are the most commonly used treatment for regulating menstrual periods. OCs protect the woman from endometrial hyperplasia and cancer of the womb (endometrial cancer). Certain OCs that contains anti-androgens (e.g. cyproterone acetate) may also effective in preventing hirsutism and acne.

Progestin – a hormone called progestin (e.g., Provera) for 21 days every one to three months. This will induce a period in almost all women with PCOS, but it does not help with the hirsutism and acne neither  prevent pregnancy. It does reduce the risk of cancer of the womb and endometrial hyperplasia.

Hirsuitism –  Excess hair growth on the face and/or other parts of the body can be removed by shaving or use of depilatories, electrolysis, or laser therapy. Many women worry that these treatments cause hair to grow faster, although this is not true (See Hirsutism). There are medications available to reverse or treat hirsuitism. This medication have anti-androgens effect (e.g. cyproterone acetate or alderone) but it has to be taken at least a 4 to 6 months and the woman must be on an effective family planning method, as pregnancy is contraindicated during the treatment.

Weight loss – Weight loss is one of the most effective approaches for managing insulin abnormalities, irregular menstrual periods, and other symptoms of PCOS. By losing 5 to 10% of body weight, periods may become more regular. Weight loss can often be achieved by program diet and exercise. Referring the patient to a dietician would be useful.

Metformin – Metformin (Glucophage) is medication that improves the effectiveness of insulin produced by the body. It may benefit in selected cases of PCOS who has anovulation. Women with PCOS, diagnosed to be diabetic should be managed accordingly.

Infertility – management options are available in women who do not ovulate regularly;

PCOS can give greater risk of developing long-term health problems which include:

How to reduce these complications?

The main ways to reduce the overall risk of long-term health problems are to have a healthy lifestyle:

PCOS is a common problem affecting young women. It is a difficult problem to treat, but attaining normal weight and living a healthy lifestyle is an effective way of controlling the condition. The medical management of PCOS should be tailored based on the presenting complaint and medical issues. 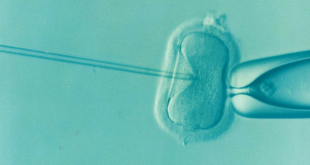