Periodontal disease is bacterial infections of the supporting structures of the teeth which include the gums and bone. If the infection only affects the gums it is called gingivitis. The gums can become swollen and red, and they may bleed upon brushing, and sometimes spontaneously.

In periodontitis, the more serious form of periodontal disease, the bacteria, directly and indirectly may cause destruction of the structures that hold the gums, tooth and bone together. Bone can be lost, and the teeth may loosen or even fall out.

Among the highlight of NOHSA 2010, 94% of dentate adults have some form of periodontal disease, which remains the same for the past 20 years, as seen in the table. Looking into more detail, the severe category, from 6% in 1990 to 17.8 in 2010. There are many possibilities to this increase in prevalence of moderate and severe cases. Amongst them; increase retention of teeth due to increase awareness on oral health, people live longer and better dental services in the country. 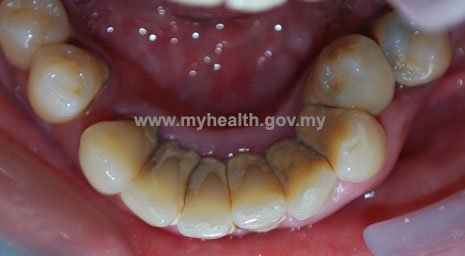 Periodontal in other populations

Singapore Adult Oral Health Survey conducted in 2003 found that 85% of 6560 adults aged 20 years and over had mild to moderate forms of periodontal disease.

The percentage of patients in the Dental and Oral Hospital, Faculty of Dentistry University of Padjadjaran (2004), needing prophylaxis treatment for adults group ages 20-34 and 35-65 were 96.34% and 94.72%.

Bacteria in the mouth infect tissues surrounding the tooth, causing inflammation around the tooth leading to periodontal disease. When bacteria stay on the teeth long enough, they form a film called plaque, which eventually hardens to form calculus. Calculus build-up can spread below the gum line, which makes the teeth harder to clean. Then, only a dental health professional can remove the tartar and help stop the periodontal disease process.

The following are warning signs of periodontal disease:

Gingivitis can be controlled and treated with maintaining good oral hygiene and regular professional cleaning. Severe forms of periodontal disease can also be treated successfully but may require more extensive treatment. Such treatment might include deep cleaning of the tooth root surfaces below the gums, medications prescribed to take by mouth or placed directly under the gums, and sometimes gum surgery.

What can I do to prevent this disease from developing in my mouth?

To help prevent or control periodontal diseases, it is important to:

How To Maintain Your Crown & Bridges

Missing Teeth – How To Replace