Cyst is defined as an abnormal cavity in hard or soft tissue which contains fluid, semifluid or gaseous. Cyst is often encapsulated and lined by epithelium.

An oral cyst is generally filled with liquid. Cyst can form anywhere in the mouth, including the lips, tongue, floor of mouth, gums, palate, throat, salivary glands or cyst can occur in the soft tissue and may appear as a small, painless bump. It is often less than 1 cm in diameter. If infected it becomes red, swollen and painful. It can also occur in the bone where a large oral cyst inside the bone can weaken the jaw. Most cysts of the jaws arise from odontogenic epithelium (which forms the teeth). The lower jaw is affected three times as commonly as the upper jaw.

The Types of Cysts

Cysts are classifed into inflammatory cysts or developmental cysts.

Inflammatory cysts are the most common of all jaw cysts and arise is associated with non-vital tooth include the following:

Developmental cysts include the following:

Oral cyst is often asymptomatic and is usually an incidental finding on radiograph which shows radiolucency. It is slow growing and may reach a large size before giving rise to symptoms such as:

Secondary effects on jaw due to oral cyst are jaw asymmetry, pathological fracture of jaw, secondary infection and numbness (if compressing on nerve).

Diagnosis is based on history, clinical examination and investigation such as pulp vitality testing, radiograph (intraoral and extraoral), aspiration and analysis of cyst fluid and histopathological examination (biopsy).

Management of cyst is removal by surgery by enucleation or marsupiallization or surgical excision. Enucleation is thecomplete removal of the cyst lining is usually done under local anesthesia for small lesions and under general anaesthesia for bigger size oral cyst.

Marsupialization is the partial removal of the cyst. This is a type of decompression procedure for the treatment of bigger cysts to reduce the size of the cyst. A window or fenestration is made in the bone and the cystic contents are evacuated. The cyst lining is left behind. The hollow cavity is then packed till it gets obliterated by bone slowly over a period of time. Antibiotics may be given if the cyst is infected.

Removal Of Cyst By Surgery 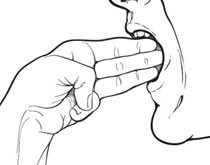