Neuroblastoma is the commonest cancer in infants and the second commonest malignant solid tumour malignancy after brain tumour; in children below 5 years of age.  Occasionally, it may also occur in older aged group. The incidence is approximately 3-5% of all childhood malignancy.

It originates from the primitive/immature cells called neuroblast that belongs to central nervous system. These cells are found in several areas of the body, such as in the neck, chest, abdomen and near the spine. These cells gradually transform into a mature nerve cells forming a network of the central nervous system. However, in neuroblastoma, due to genetic mutation, these cells continue to proliferate uncontrollably forming a tumour mass. As with other solid tumour malignancies, it is staged as I to IV.

Neuroblastoma most commonly arise in and around the adrenal gland which is situated above the kidneys. But it can arise from any area where these nerve cells are located. 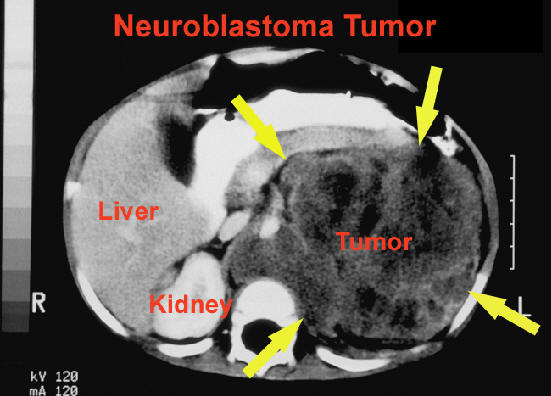 The clinical signs and symptoms vary, depending on the site of origin and the stage of the disease.

This is the scenario normally encountered in many countries. Our data showed that most of the patients were brought for medical attention at stage III to IV. Sometimes, the children were initially investigated and treated at a medical centre for other medical reasons such as prolonged fever, anaemia, bony pain. Later, these children would be confirmed to have neuroblastoma.

Rarely, the disease is diagnosed incidentally via antenatal ultrasound of the foetus. This is a congenital type and may have a good outcome due to early detection and other circumstances.

Neuroblastoma is one of the solid tumour malignancies that is difficult to detect at an early stage (stage I-II). It can be silent for many months before it starts to manifest the symptons. This is due to the fact that most of the tumours are deep seated in location. It is not until the tumour has grown to a size making it detectable during medical examination or to be noticed by the patient’s parents and causing discomfort to these children, that they are brought to medical attention. Most of the time, the tumour is painless. When the site of origin is close to the spine (paraspinal area), the tumour may have neurological deficit such as paralysis of any of the extrimities or bowel and bladder incontinence. These children need to be brought urgently to the hospital for emergency intervention. 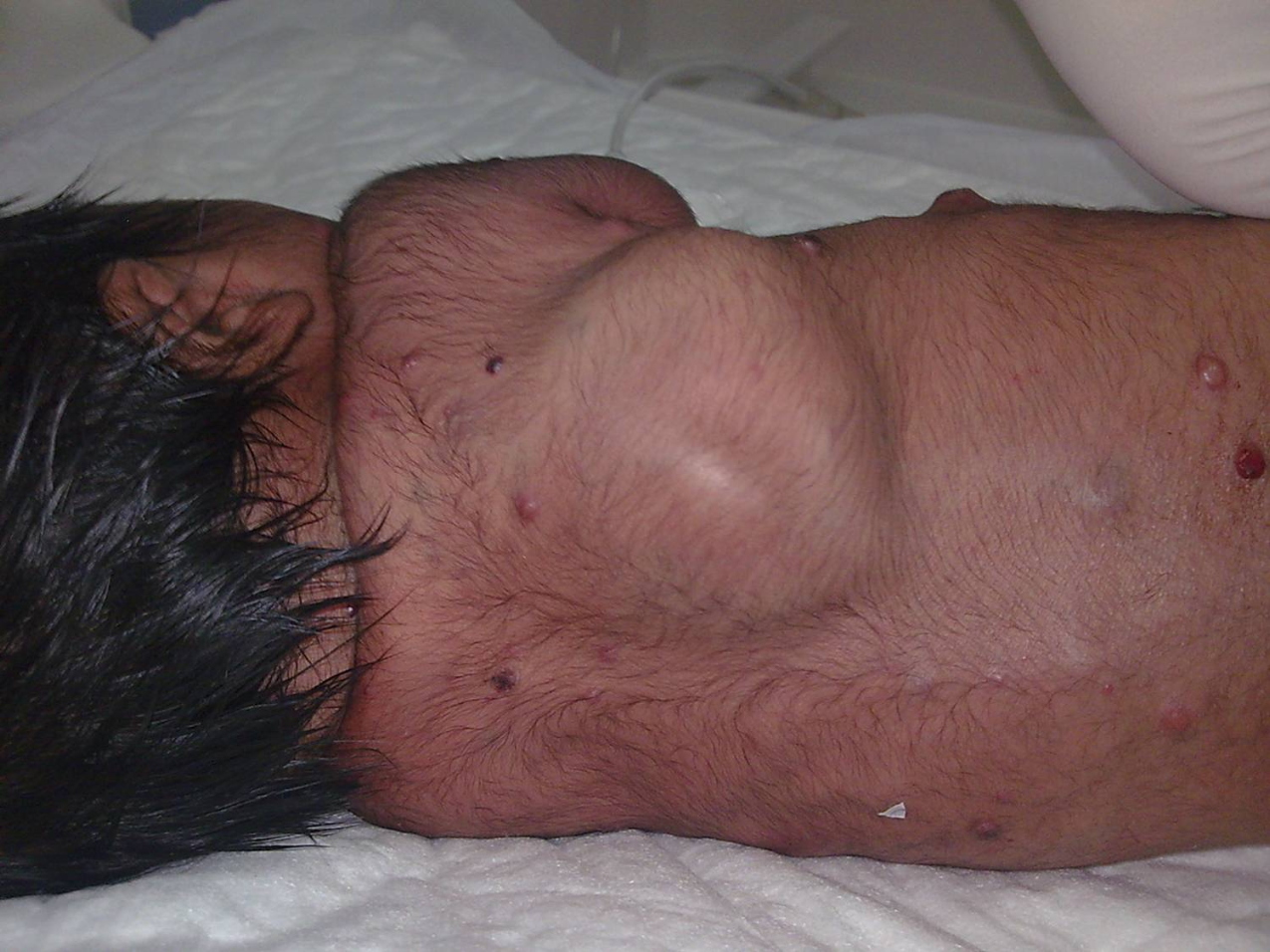 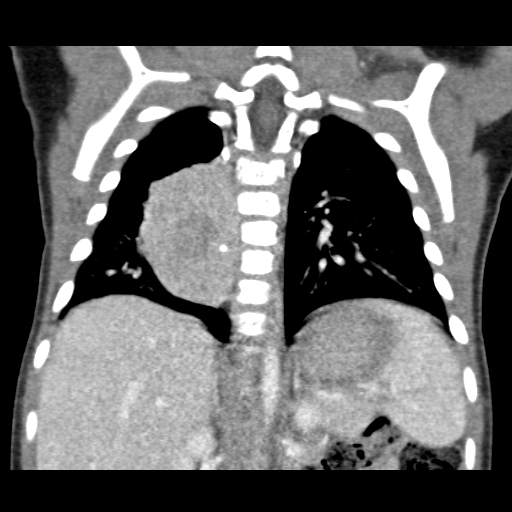 In rare cases, patients may exhibit symptons of paraneoplastic syndromes such as rapid eye movements and unsteadiness with movements. 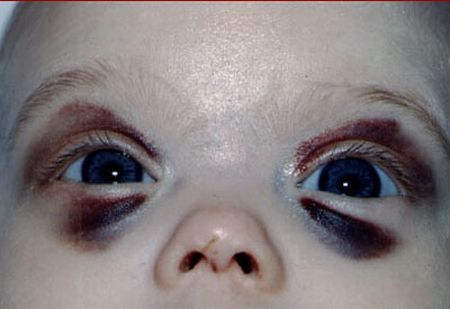 Image IV – a baby with bruise like lesion surrounding both
eyes; one of the common presentation of neuroblastoma

If neuroblastoma is suspected, the patient will need to undergo several tests and procedures.

This information is important for both oncologist and surgeon treating the patient in order to plan for the treatment which includes surgical removal of the tumour. Other special scans that the patient may need to undergo are bone and MIBG (metaiodobenzylguanidine) scans. These scans will provide information on the distant spread of the disease. Due to the nature of the scan procedure which require patients to lie still for several minutes while the images are taken pose some difficulties to younger aged children. They will require sedative medication given by accompanying doctor in order to put them to sleep so that the procedure can be run smoothly.

Routinely, all patients will have their blood tested for many things as per clinical indication or as instructed by attending physician. This is important especially when the blood test show derangement in the parameters that would suggest bone marrow involvement. As this is one of the commonest sites of the disease spread, all patients will have to undergo a minor procedure called bone marrow aspirate (BMA) and trephine biopsy in order to confirm whether the involvement is present. Another minor procedure that the patient will have to go through is tissue biopsy from the tumour mass. This is the utmost priority in order to obtain a definite diagnosis of the disease. In normal circumstances, all these 3 minor procedures would be performed in the same sitting under general anaesthesia.

In some oncology centers, tissue sample that is either taken from the tumour mass or from the metastatic sites like lymph nodes, bone marrow and trephine biopsy; certain abnormalities in chromosomes or genes can be identified  from the tissue core. This may represent important factor in predicting the outcome (prognosis).

The staging is done based on results of the said investigations conducted. As mentioned earlier, it can be divided into 4 stages as below;

Stage I – The tumour is localized to the site of origin. The tumour is completely removed via surgery. The regional lymph nodes are free from tumour cells invasion.

Stage II – The tumour has grown slightly beyond the site of origin. It may have incomplete resection via surgery. The regional lymph nodes can either be positive or negative of tumour cells invasion. However, the lymph nodes on the opposite side should be negative.

Stage IVS – This stage is only confined to infants with special metastatic sites – skin, liver or less than 10% bone marrow involvement. 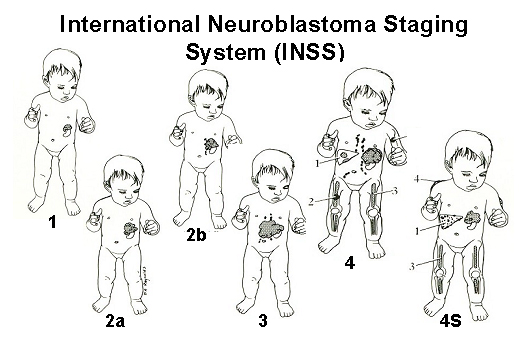 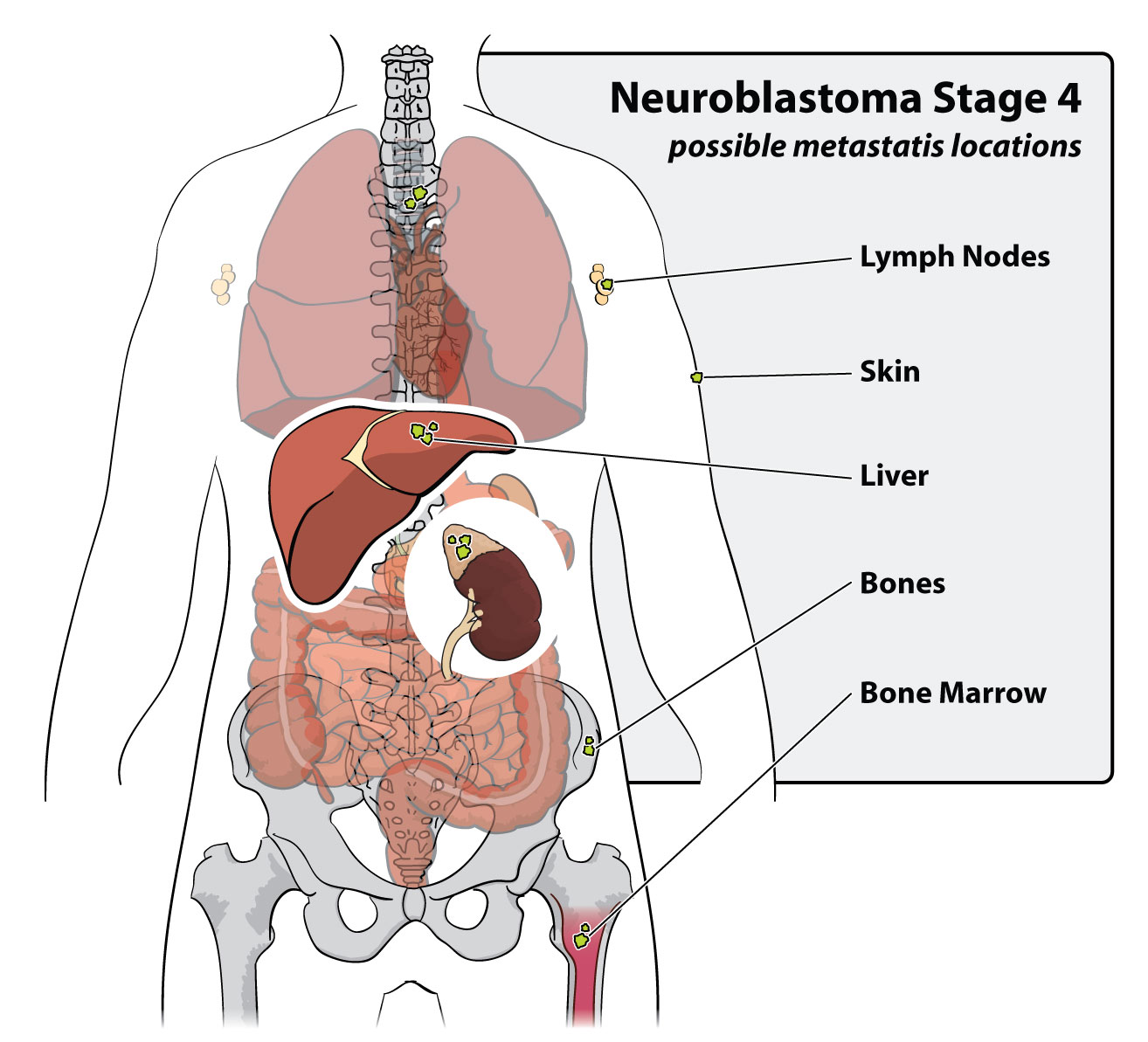 Image VI – the different sites of distant spread of neuroblastoma

Treatment varies depending on several factors such as age, stage of the disease and presence/absence of certain prognostic factors. Based on these, patients can be divided into low risk, intermediate risk and high risk groups.

A combination therapy consisting of chemotherapy, surgery and ±radiotherapy form the standard conventional treatment for neuroblastome. E.g. some patients in the low risk and certain subtypes of intermediate risk groups may undergo surgery as the only treatment without having to receive additional therapies.

On the other hand, patients in the low/intermediate risk groups who have received chemotherapy and undergone surgery may receive radiotherapy if the former ones have not been helpful. High risk group patients who confer the major bulk of neuroblastoma patients are to receive all the 3 modalities of therapy.

New forms of treatment have emerged for the past several years, especially to improve the outcome of the high risk group. These include high dose chemotherapy followed by autologous stem cell transplant, biological therapy and immunotherapy using monoclonal antibody. Even newer treatment recently has been seen at few centers in oversea utilising MIBG as a form of treatment. All these however are yet implemented in Malaysia due to high cost and limited resources.

Children below 1 year old who are diagnosed to have the tumour staged at I and II may have a better chance of cure as compared to elder aged group. However, this may only be true if they do not bear neuroblastoma related poor genetic factors e.g. N-MYC amplification. The high risk group patients are the hardest to be cured. Previous histories have shown that these patients are likely to become resistant to standard treatment or experience disease recurrence after initial successful treatment.

Patients who are labelled as stage IVS; are likely to escape from all forms of treatment if the disease does not render any danger signs and symptoms to the patients. It has been shown that these patients may have spontaneous resolution of the disease. Therefore, despite being in stage IV, their prognosis is good.

Hyperactive: Is It Bad Parenting?