Neonatal hyperbilirubinemia may result from various conditions, some of which are transient such as neonatal physiological jaundice of the newborn while some are more serious conditions that cause sustained hyperbilirubinemia in the newborn. Neonatal physiological jaundice results from increased RBC breakdown and immature neonatal liver. It is not harmful, often appears in 2 to 4 days old baby and disappears by 1 to 2 weeks of age. Prolonged jaundice often indicates a serious condition in neonate, such as hemolytic disease of newborn, biliary atresia or in rare situations, idiopathic neonatal hepatitis.

Blood can be obtained from neonates’ veins or heel. A repeat sample may be requested due to insufficient volume, contamination or other factors. The above techniques require drawing of blood causing pain and trauma to the neonate and therefore in some healthcare facilities, non?invasive transcutaneous photometric measurement at point of care using a dedicated instrument ‘bilirubinometer’ is used in infants in lieu of blood drawing.

Bilirubin is photosensitive, and the blood samples should be protected from light for accuracy. Exposure of samples to light or heat may cause degradation of bilirubin and reduce its concentration. The blood sample should be sent immediately to laboratory for testing as delays in transportation of blood samples can also influence the bilirubin test results. The serum/plasma of jaundiced sample appears darker (brownish), as shown in the diagram. 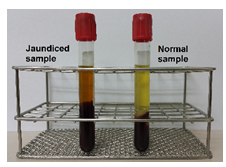 Absorbance is measured with a dual-wavelength narrow bandpass spectrophotometer. Neonatal Total Bilirubin can be determined from the difference in absorbance at these two wavelengths.

Bilirubin is most commonly measured based on the principle of Diazo reaction method reported by Hijmans van den Bergh, in which diazotized sulfanilic acid (Ehrlich’s diazo reagent) reacts with bilirubin to produce pink to reddish-purple coloured azodipyrroles that can be measured calorimetrically. In aqueous solution, the water soluble, conjugated bilirubin reacts rapidly with the reagent and is said to be “direct-reacting”. However, when methanol is added, both conjugated and unconjugated bilirubin are soluble and react with the reagent, providing the total bilirubin value. The unconjugated bilirubin, which is much less soluble in aqueous solution and can be measured only after the addition of methanol, the term “indirect-reacting” is applied.

HPLC methods allow for relatively rapid separation and quantification of the bilirubin fractions. A newer highly accurate method of estimation involves alkaline methanolysis of bilirubin followed by chloroform extraction of bilirubin methyl esters and later separation of these esters by chromatography and spectrophotometric determination.

However, for diagnostic purposes, the use of direct and indirect diazo techniques provides sufficient clinical information.

Dietary pigments such as carotene will falsely elevate Bilirubin level measured by direct spectrophotometric method. However, dietary pigments generally not present in neonates due to their limited diet. The diazo method of Bilirubin estimation is inaccurate in detecting low levels of Bilirubin. In particular, direct measurements over estimate Conjugated Bilirubin at low concentrations and underestimate it at higher concentrations. Thus in some cases, slight elevation of Unconjugated Bilirubin failed to be identified, which is of value in detecting conditions like Gilbert syndrome.

Elevated Bilirubin level in neonates can diffuse into basal ganglia and cause toxic encephalopathy (kernicterus) due to their immature blood-brain barrier. Kernicterus is characterized by the yellow staining of the lipid-rich meninges of the brain and spinal cord. It typically occurs at Bilirubin levels greater than 20 mg/dL( 342 mmol/L) in infants and may result in death, cerebral palsy, deafness or mental retardation. Hence infants who develop jaundice need close monitoring and severe neonatal jaundice requires immediate medical attention. 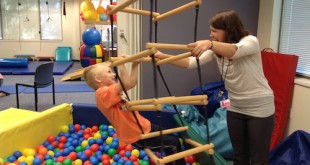