Malaria is a vector-borne infectious diseases. Infecting human, birds, monkeys and other primates. There are only five (5) types of parasites that have been identified as the cause of malaria, namely plasmodium falciparum, plasmodium vivax, plasmodium ovale, plasmodium malariae, and plasmodium knowlesi once only known to exist in animals such as monkeys (Cox-Singh et al, 2008)

Sporozoites (the malaria parasite in the salivary glands of infected mosquitoes) is secreted into the bloodstream of humans when the mosquito takes blood and move into the liver. While in liver cells, these organisms produce thousands of merozoites released into the bloodstream and attack and destroy red blood cells caused anaemia (low hemoglobin in red blood cells), jaundice, swelling of the liver and spleen including symptoms of other common such as fever, chills, hot sweats, nausea / vomiting and colds. Whereas in certain cases such as severe plasmodium falciparum infection, an obstruction of brain blood circulation which in turn leads to complications resulting in coma and deaths.

Parasite species of plasmodium vivax an plasmodium ovale can produce hypnozoites (the name derives from “sleeping organisms”) that can remain dormant in the patient’s liver for a few months (usually 6-12 months) up to 3 years. Thus, relapse can happen at any time.

Some merozoites in the blood cells turn into gametes that cause the spread of malaria. When a mosquito sucks the blood of an infected person, it also sucks gametes. In the body of the mosquito, gametes develop into sporozoites and move to the salivary glands of mosquitoes, completes the circle and ready to infect other people. 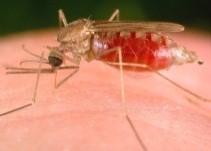 Anopheles mosquito is a vector of malaria. There are about 41 species of anopheles dominant out of more than 2,000 species have been identified (Sinka, 2011). An.Maculatus, An.Epiroticus, An.Campestris, An.Letifer, An.Dirusdan An.Crascensdi are common in peninsular Malaysia. An.Balabacensis, An.Sundaicus and An.Flavirostrisdi in the state of Sabah, while in Sarawak the main spesies are An.Latens, An.Donaldi and An.Letifer. The existence of malaria-transmitting mosquitoes in an area influenced by factors such as the ecological environment (gardens, plantations, logging and beach), rainfall, wind speed, temperature, sunlight, altitude and form of its water.

The optimum temperature needs is 25°-27ºC. Mosquitoes do not hold at 5º-6ºC. Low humidity shorten the lifespan of mosquitoes. The rainfall and the heat factors will increase mosquito breeding. In general, the incidence of malaria is rare at an altitude of more than 2000m above sea level. The wind factor also affects a flying mosquito, which in normal circumstances mosquito flying distance from the place of origin is about 2-3 km radius. Only the female mosquito sucks blood from early evening until late at night.

The nature of anopheles mosquitoes is resting outdoors after sucking blood and feeding/sucking the blood out of the house will facilitate contact between man and infected mosquito. The mosquito’s life is dynamic and depend on the balance of nature in their habitat. The growing needs of their eggs by sucking blood of an animals in the forest are sufficient without having to suck human blood. However, due to the environmental degradation, damage of forest ecosystems, the natural balance of life and habitat of mosquitoes were also disrupted, forced them to look for a new source of blood especially in the vicinity of the forest. Thus, healthy people whose work involves activities in and out of the forest, is highly expose and risk of mosquito bites and came home with the parasite in the blood that causes malaria.

Since 2010, the trend of malaria transmission is increased at 10% per annum especially in free zone nationwide. Refer Table 1. There are several key factors that contribute to transmission.

Table: 1: Transmission based on locality stratifcation.

Economic development of the country with various mega projects, clearing new land (farm/estate), construction of roads across the forest and dam, which led to an increase in mosquito breeding sites which ultimately increase the risk of contact between an infected mosquito to humans.

The influx of immigrants and foreign workers from the malaria endemic country either illegally or legally, local residents and government officials working near forest fringe/forest reserve are the major contributor in the spread of malaria. They bring in the malaria parasite into the village/county/state and country that was previously no case but malaria vectors are ready to bite and spread the malaria parasite.

Faith healers and traditional treatment cannot treating malaria. This perception cannot help but cause malaria parasite gametes and subsequently turned into a source of infection and more severe, causing death. In addition, the failure of taking anti-malaria medication scheduled is causing recurrent infections, especially for p.vivax and p.ovale infections. In fact, the attitude of the management of construction sites, farms that did not make malaria as one of the priorities in the welfare of their employees also contributed to the spread of malaria. Seeking late treatment by the illegal immigrants for fear of being caught by the authorities also a contributing factor of re-emerging malaria in the region. In addition, there are also migrants who bring in unregistered and fake anti-malaria drugs
that may contribute to the increased incidence of anti-malaria drug susceptibility.