1. Introduction
Malaria cases in Malaysia still remain as major public health problem although the infections have been reduced over the last decades. Malaria is a vector-borne tropical infectious disease of human caused by genus Plasmodium. The five Plasmodium species are P.falciparum, P.vivax, P.ovale, P.malariae and P.knowlesi. Those with severe malaria are higher in rural areas and mortality rates keep increasing. Patients infected with malaria parasite develop symptoms such as fever, fatigue, headaches, nausea and vomiting. Those with severe malaria infection can develop shock, coma, kidney and liver failure. The symptoms usually begin seven to fifteen days after being bitten by female Anopheles mosquito. The mosquito’s bite inject the parasites into human’s blood system. Laboratory diagnosis is very important to determine the spesies of malarial infections. The risk of the disease can be reduced by using insect repellents or mosquito nets. The complications caused by the spesies can be treated by specific antimalarial medicine accordingly. 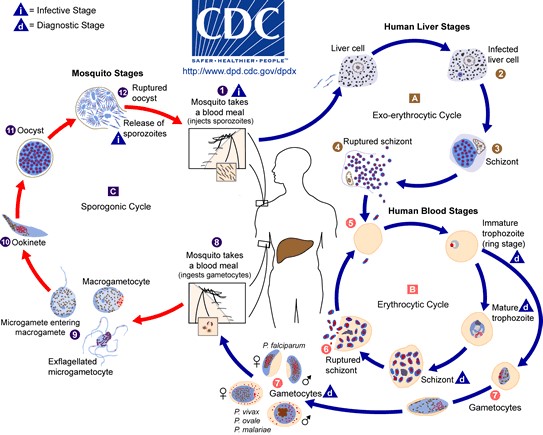 2. Laboratory Diagnosis
a) Laboratory Method
Rapid Diagnostic Test is the most simple method used in laboratory. Detection of parasite antigens is based on immunochromatographic methods. The result is sensitive but should interpreted together with microscopy examination. The advantages of rapid tests are they are quick to perform and less workflow. But the rapid test is expensive and less specific.
The Direct Microscopic Examination of Blood Films to determine the malaria parasite is the gold standard for confirmation of malaria parasite in Malaysia. Thick and thin blood films is performed on a glass slide and stained with Giemsa reagent. The malaria parasites can be detected qualitative through thick film. On the other hand, the thin film can determine the parasite species and quantitative. However, this method require well-trained laboratory technician.
The Polymerase Chain Reaction (PCR) is a sensitive method which allows the amplification of specific region of the malarial DNA. However, PCR method is expensive and require skillful biotechnologist. The test may carried out for cases with symptoms of malaria although no parasite seen in BFMP.
Additional laboratory findings may include full blood count, bilirubin and aminotransferases analysis.

c) Specimen Collection
Patient’s finger is sterilized by alcohol and allowed to dry at room temperature. Then the fingertip is pricked with needle or lancet. The thick and thin film should be prepared in one slide. A thick film is prepared by stirring drops of blood in circular motion with corner of the slide. To prepare thin film, place the smooth edge of slide and spread the blood by adjusting angle between slide and spreader to 45°. Then smearing the surface with consistent sweep along the surface. The thin film is fixed with methanol after dry at room temperature.

3. CONCLUSION
The conventional microscopy is still the gold standard for accurate malaria diagnosis in Malaysia. Rapid tests are quick and convenient but costly. Molecular testings like PCR are carried out for confirmation and mortality cases. The most effective test for malarial diagnosis depend on the urgency of the diagnosis, financial budget and etc.