How Do Children Learn Language

Language learning is a complex process. It happens gradually and takes a long time. Children begin to learn to speak after birth and become proficient by the age of 5-6 years old.

However, there are variations in the period of language acquisition among children. Some children are articulate by 3 years old and there are some who just begin talking at that age. This often worries the parents and guardians. The language acquisition process actually depends on many other factors that affect language learning.

Listening skill is the initial step in language learning for children. These skills are the key skills to be mastered by children before they start producing sound.

After birth, babies begin to hear and respond to the speech rhythms of people around them. Their responses are in the form of smile, laugh and cry. Babies begin to recognize the voice of individuals who regularly interact with them. At the age of 6 months, listening skills improve and the baby starts to distinguish speech sounds from the environmental sounds. The listening process becomes more complex when the baby is 1 year old and they begin to listen and understand the information obtained.

Children become more adept in understanding the information at the age of 3 to 4 years in which they can understand nearly 1500 words. They begin to understand long instructions (3 steps) and simple questions like ‘What’ and ‘where”. By this time, they have understood more concept s such as prepositions, colours and gender.

Meaningful sounds are generated by moving our articulators. Speaking is not only limited to the production of sound, but also involves the use of an appropriate rhythm and intonation.

As early as 4 months, babies begin to produce vowel sound or also known as vocalization. Normally, babies will vocalize repeatedly such as aaa, iii.

When the baby is 6 months old, they will start babling dan cooing. Babbling is related with phonation and the movement of opening and closing of the jaw. At the early stages of babbling, babies usually produce a combination of consonants and vowel sounds such as (baba or mama) repeatedly.

The babbling combination becomes harder when the baby is 8-9 months old. During this time, they produce a combination of sound that involves more consonant sounds such as (badebo).

Moving forward, when they are 9-10 months old, the baby start to mimic the speech structure of adults. At this stage, they produce “jargon” sound. Jargon sound is vocalisation that is resemble adult speech intonation. However, the produced sound has no meaning.

Children begin to produce their first words when they are about one year old. During this time, they learn that one word has it’s own meaning. They will try to imitate the word when it is said by an adult. Children’s vocabulary will increase tremendously after one years old. The child’s ability to build sentences will increase from time to time and they will be able to use adult sentence structures when they are 5-6 years old.

Health : Health plays an important role in language learning. If the child has health problems which affect cognitive development such as Down syndrome, Autism, Cerebral Palsy and others, the acquisition of language will be slower than normal children who are in the same age group.

Cognitive: The cognitive ability refers to the capability of children to think. If children have low cognitive capabilities, their reception and learning will be delayed compared their peers.

Physical: There are many organs involved to produce speech sounds. Organs such ear, vocal cord, tongue, mouth, teeth dan palate helps to produce normal speech sounds. If children have abnormalities in their speech organs, the production of speech sounds will be affected.

Example; Cleft palate can lead to nasal speech sounds and difficulty for listeners to comprehend it.

Environment: Environmental factors refer to individuals who are around the children, including family members, guardians, teachers and friends . They play an important role for providing language stimulation to the child at the early stage. However, there are also other factors that influence children’s language learning such as level of education, socie-economic status and family cultures. 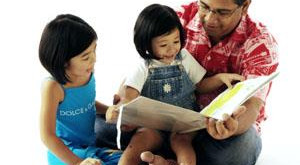