Some common childhood eating behaviours happen when children begin to experiment and explore their own independence. This is part of a child’s normal psychological development and parents should not be unduly worried. Rarely is it due to serious underlying diseases.

How is food refusal defined?

Food refusal occurs when a child refuses to eat new food or whatever food that has been offered.

What types of foods are usually refused?

Food refusal in children is part of their normal psychological development. These children are generally healthy despite refusing certain foods and they usually do not have any disease. However, if your child has symptoms such as loss of weight, vomiting and choking, your child would need a proper evaluation by your doctor. He may have other diseases (which is beyond just food refusal) such as :

How does food refusal manifest?

If your child is growing and developing normally, then the food refusal may be normal.

If your child has other symptoms or signs such as the following, consult your doctor:

Are there likely to be any complication associated with food refusal?

Can food refusal be treated?

Your child needs to be properly evaluated by a doctor before any treatment. Even if your child chooses to reject one food group from his diet, there is usually no cause for concern if your child is growing normally.

If your child is growing normally despite refusing certain foods, try the following:

Most importantly, do not turn mealtimes into a battle.

How can food refusal be prevented? 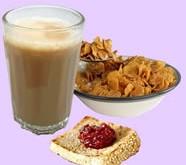 Nutrition for the Underweight