Development of speech-language skills might be hindered due to medical issues, for example, Epilepsy. Epilepsy is defined as abnormal brain activity. This problem causes changes in child’s behavior or physical, for example, loss of consciousness, sudden silent and physical cramp.

Language understanding and speech activities are being control by the brain. When epilepsy occurs, normal brain activity is interrupted. Speech and language development process also interrupted. Some children become forgetful of what they had already learned. It has becomes a major worry to parents.

Below are some of the effects on speech and language development following epilepsy episode:

Parents and family play an important role in helping the child to acquire speech and language skills after epilepsy episode. Loss ofcommunication skills following epilepsy should not be an excuse not to help the child to slowly acquire the skills back. Language stimulation in daily routine shall be implemented in order to help the child.

Below are some of the key points that the parents should do to help their child:

In conclusion, epilepsy usually effect child’s speech and language development. Because of that, parents and family should do their best and play their roles to help in the rehabilitation process. Parents and family is the best model for the child. Consistent language stimulation especially in daily routine will definitely help the child to communicate better. 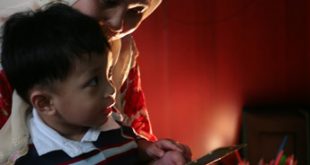 Autism : Will My Child Be Normal?