Blocked nose is a common condition and rarely may cause serious health problems in babies. Blocked nose can also be referred to as stuffy nose or nasal congestion. Nasal congestion occurs when the tissues lining the nose becomes swollen due to the inflamed blood vessels. The nasal passages in babies are very tiny and are easily blocked making breathing difficult. A young baby’s natural instinct is to breathe through their nose even when it is blocked. It is therefore important to keep baby’s nose clear as a blocked nose can disrupt sleeping and feeding. If nasal congestion is not treated it can lead to problems in ears, may interfere in hearing, and speech development. It may also cause snoring and obstruction during sleep.

There are many causes of nasal congestion in babies. One of the common causes is viral infection to the upper respiratory tract. Viral infections commonly occur in babies because of poor resistance against these germs, and one of the conditions is common cold. These viruses are transmitted by air which causes the nasal membranes to swell up causing congestion. If the nasal mucous turns yellow or green, it is a clear indication of bacterial infection. Sinus infection also causes nasal blockage. If the nasal sinuses are inflamed it leads to a condition called a sinusitis that causes inflammation of sinuses in and around the nasal region.

Deformities of the nose and nasal septum can also lead to nasal congestion. Nasal septum is cartilage that divides the nasal cavity into two nostrils. These deformities may occur due to congenital or post injury which will lead to obstruction while breathing. Enlarged adenoid glands are another common cause of nasal congestion. Adenoid glands are small tissue located at the back of the nose.

Allergy is also a common cause of nasal congestion that occurs as a result of inflammatory response to allergens such as pollen, dust mites, house dust, and animal dander, tobacco smoke. The inflammation is mediated by a substance called histamine that may cause congestion. Dust mites are a type of allergen, microscopic insects that live in dust under humid conditions. They are commonly found under furniture, bed, and carpets. During the allergic response these membranes expand leading to nasal congestion.

The symptoms of common cold are congested and runny nose. Clear nasal discharge may become thicker and even turn green.  After a few days, the discharge becomes clear and runny again. A low grade fever in the first few days of a cold is common and some babies may sneeze, cough and develop a hoarse voice or have red eyes. If the baby has an allergy, he may develop itchy watery eyes, repeated sneezing attacks, possible itchy skin or eczema, clear nasal mucus and usually no fever.

Colds are uncomfortable, but are not a serious health risk. However, they do need some help because a baby will insist on breathing through the nose, even when it is blocked. A clear nose is essential for feeding as the baby either has the nipple or teat in his/her mouth. A stuffy nose can therefore make feeding time difficult, as the baby may become irritable and the mother frustrated and concerned, which in turn may affect the flow of breast milk.

The main goal of treatment is to help a baby breathe easily and sleep without disturbance. There is no cure for the common cold. In addition, a baby’s immune system will need time to get stronger. However, we can help by making a baby feel more comfortable and by preventing the cold from getting worse. Plenty of rest and fluids are crucial, and a baby will need to be able to breathe properly to do either of these things. Stuffy noses may also linger for a few weeks even when the cold is over. Bear in mind that a fever is a normal immune response – it needn’t be dealt with using medication unless a baby appears uncomfortable. Some babies have a fever and are happy or cope fine. But if a baby is uncomfortable or distressed, some pain relief or antipyretic may help him.

There are a few ways we can naturally help a baby from blocked nose. Because babies can’t blow their nose, they rely on us to provide the appropriate help. Warm baths can help unclog baby’s nose from the steam. Make sure the water remains at a safe temperature for a baby. Saline nasal drops can be used to loosen the mucous and clear the nose. A manual nasal secretion sucker can be used to remove the nasal secretion.

To treat allergic rhinitis we should identify the indoor and outdoor allergens or irritants which cause the problems and subsequently remove or avoid them if possible. Bed sheets should be washed with warm water, toys and carpets removed from baby’s room, and the bed sheets and pillows covered with dust mite protection covers that will maintain the humidity at 40%. Anti –histamines and decongestants may be prescribed to prevent the allergic response and improve congestion.

Even though blocked nose in babies may not cause serious problem, parents should know when to seek medical attention. Some of the signs that may warrant doctor attention are when babies under 3 months has temperature more than 37.5ºC, cold symptoms longer than 1 week, cough worsens and turns into wheezing or gasping, baby pulls or tugs at his/her ears frequently and if parents have questions about their baby in any way. 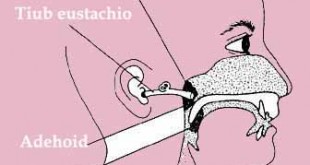