Tetanus is a disease caused by neurotoxin producing bacteria called Clostridium tetani. This bacteria are found everywhere in the environment, particularly in the soil of warm and moist areas. The bacteria can get into the body through broken skin, usually through injuries from contaminated objects such as nail and needle. Tetanus is different from other vaccine-preventable diseases because it does not spread from person to person.

When introduced into the body, the bacteria will produce neurotoxin which attacks the human nervous system and causing the following symptoms:

Diagram : Painful muscle stiffness all over the body due to Tetanus
Source: CDC United States of America

Tetanus could be fatal due to breathing difficulty if the treatment is delayed. The treatment of tetanus includes administration of human tetanus immunoglobulin (antitoxin), wound care and drugs such as antibiotics and drugs to control muscle spasms. Depending on how severe the infection is, a machine to help you breathe may be required. A tetanus vaccine should be given once recovered as recovery from clinical tetanus does not result in protection against the disease in the future. Preventive measures should be taken to prevent tetanus infection. Being fully immunized is the best tool to prevent tetanus.

Administration of tetanus vaccine is to prevent tetanus infection.

Tetanus vaccines are recommended for all people as tetanus could infect anyone regardless of age, gender and race.

Tetanus vaccine is given to pregnant women in order to prevent neonatal tetanus due to unclean instruments used to cut the umbilical cord.

Everyone needs protection from tetanus. If you have not had a booster shot in 10 years or more, you should receive a tetanus shot.

Tetanus vaccine is composed of toxin of Clostridium tetani which has been detoxified and adjuvant is added to a vaccine to increase the body’s immune response.

Tetanus toxoid used alone or in combinations is considered safe. Tetanus toxoid causes minor local reactions such as pain and redness and occasionally nodules and, very rarely, sterile abscesses (1–10 per million doses administered). A sterile abscess is a localized swelling filled with fluid without organism growth.

According to the database of the National Drug Safety Monitoring Centre, National Pharmaceutical Control Bureau, majority of the adverse events reported post Tetanus Vaccine immunization are mild in nature and vaccinees recovered from the adverse events. 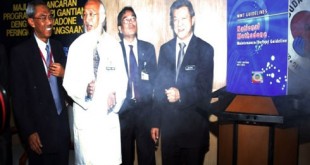