Analysis Of Fertilization Of Embryo Development

Fertilization takes place when the sperm has successfully entered the ovum and fuse together resulting in a zygote.  The zygote contains the combined genetic material carried by both the male and female gametes which consists of the 23 chromosomes from the nucleus of the ovum and the 23 chromosomes from the nucleus of the sperm. These 46 chromosomes undergo changes after the mitotic division which leads to the formation of the embryo having two cells, 24 -30 hours after sperm entered an ovum.

When the assessments were done?

The assessment were done a day after the ovum or oocyte retrieval. About 16 to 18 hours after the insemination technique, ICSI or IVF.  The observation of the zygote and embryo development will be continued until the embryo divide and cleave to two to four cells embryo on day 2 (44 to 46 hours) and cleave to six to eight cells embryo (66 to 68 hours) on day 3 post insemination.

Soon after development of the blastomeres begin to form the tight junctions with one another, leading to deformation of their round shape and formation of a mulberry-shaped mass of cells called a morula, this also called compaction. The blastocyst is a structure formed in the early development of mammals.  In humans, its formation begins 5 days after fertilization.

Immature oocyte where the germinal vesicle has broken down and no first polar body extruded yet.

Mature oocyte where the first polar body is expelled into the perivitelline space.

The assessments of zygote were done after 16 to 18 hour post insemination.

A fertilized ovum with 2 normal pronuclei and 2 polar bodies post 16 to 18 hours of insemination. 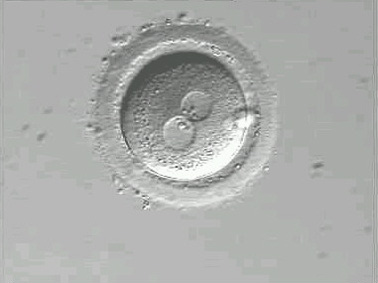 Post 48 hours of insemination with 2-cells embryo without fragments but uneven size of blastomeres. 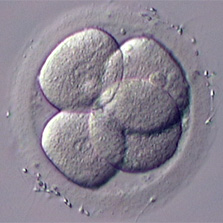 Day 3 cleavage with 6 to 8 cells embryo 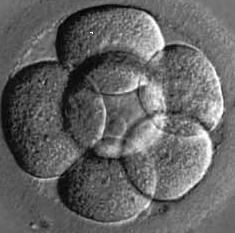