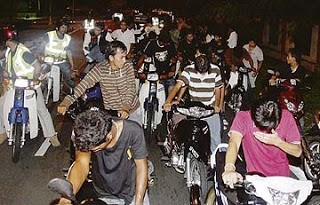 What is Mat Rempit?

Mat Rempit is the Malaysian terminology for illegal street racing, and those involved in it. Street racing is an illegal form of motor racing that happens on a public road. This can either be spontaneous or well-planned and coordinated1. Street racing exists all over the world, using different terminologies such as “Sprints” or “cannonball runs” in Europe and USA, and Hashiriya (???) in Japan1. The term ‘Mat Rempit’ is coined from ‘Mat’ which is a Malay term that refers to a male person or persons, and ‘Rempit’ refers to the activity of driving a motorcycle in a fast and reckless way, breaking the rules of the road2. In Malaysia, street racing is illegal. Watching a street race is also illegal. This is enforced by the Malaysian police. Among the participants are teenagers driving modified cars or riding motorcycles1.

What do they do?

Teenagers who are involved in this activity usually involve themselves in illegal street racing, or drive recklessly on the public road. Mat Rempit are known for their ‘Superman’ stunts performed on their motorcycles. They also do “Cilok“, which is a kind of racing in which racers weave in-between moving and stationary traffic at high-speed. They usually move in large groups and sometimes raid isolated petrol stations. Sometimes they can cordon off normal traffic flow to allow their friends race along a predetermined circuit. Illegal racers can be distinguished by their over-modified vehicles which do not follow road regulations in Malaysia1.

What is a high risk behavior? 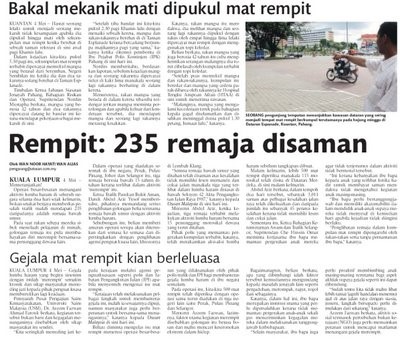 What are the high risk behaviours that Mat Rempit usually engage in?

Mat Rempit has been associated with gangsterism, gang robbery, involved in fights, vandalism, theft, bullying, killing, rape, free sex, and use of alcohol and drugs2, 4. Apart from driving overmodified motorcycles, many ‘Mat Rempit’ do not have a valid driving license, and are riding stolen motorcycles2. Promiscuity has also been associated with Mat Rempit, with ‘Minah Rempit’ as their pillion riders. Along with promiscuity come sexually transmitted diseases, HIV, Hepatitis B, Hepatitis C and syphilis. Promiscuity spawns unwanted or unintended pregnancies, and abandoned babies. Girls and money are the frequent prize for an illegal race2, 5. Many Mat Rempit are still studying as they are young teenagers.

What other things do Mat Rempit usually do?

If there are traffic check points by the police, Mat Rempit have been known to drive in the opposite direction of traffic flow to avoid the police. Some have driven through the traffic brarriers5. While racing, some Mat Rempit will shut their eyes while driving, turn off the motorcycle headlights, and drive the opposite direction to the traffic flow. Posssibly they might be driving under the influence of drugs such as syabu or ‘ice’. Apart from these very reckless behaviours during driving, they are not using any safety protection gear as a racer participating in a legal race on a designated race track would, in order to prevent injuries. Many a time, they would not even use a safety helmet4.

Why do these Mat Rempit behave the way they do? What caused them to do it?

There are many reasons that caused a teenager to join the group and activities of Mat Rempit. Many teenagers who have become Mat Rempit come from broken families with their parents at home fighting almost all the time2. This has caused the teenager to seek love and attention elsewhere outside their home. Another reason is curiosity and wanting to try, lack of attention and lack of boundaries and rules given by their parents, the influence of friends, to fill in their time, to get satisfaction in an extreme manner to show off, to get the prize money or the prize girl, low socioeconomic and educational background, the influence of films or movies, and as a sign of rebellion5. ‘The Fast and the Furious’ is an example of a movie that glorifies street racing. Video games such as ‘Midnight Club’, ‘Need for Speed’, ‘Burnout’ and ‘Grand Theft Auto’ are games that feature street racing and car theft that many teenagers are playing on their Playstation sets1. The arcade game ‘Dreamcast’ is another game played by many teenagers which features street racing1. These are direct and indirect influences on a teenager when he is faced with a decision ‘Should I be one of them? Should I join my friend to be a Mat Rempit?’

What can happen as a result of the behaviours and activities that Mat Rempit frequently engage in?

Mat Rempit activity disturbs the general peace of the neighbourhood with their loud motorcycle noises. Theft, snatch theft, and house robbery have been attributed to Mat Rempit2. The Kent, Washington police department has listed auto theft and carjacking’s as a consequence of street racing1. Promiscuity and free sex is another worrying trend as there is the risk of sexually transmitted diseases, HIV, AIDS, Hepatitis B, Hepatitis C and syphilis as mentioned earlier. Many of these teenagers are still in school, and they are spending their time on these futile Mat Rempit activities instead of studying and working hard to make their tomorrow better than today. Basically they are not contributing to society in a positive way, neither are they trying to improve the socioeconomic position of their families for a better future.

The Kent Washington police department USA has listed traffic collisions including fatalities as a consequence of street racing1. Many accidents and death have happened because of Mat Rempit, due to their reckless driving and careless disregard of the law. Each year there are approximately 37 000 fatal motor vehicle crashes in the United States. Speeding is a contributing factor in about a third of these crashes. As the travel speed of a vehicle increases so does the risk for a crash as well as the risk of a fatality7.

In Malaysia, police officers have died whilst pursuing Mat Rempit which was published in News Straits Times newspaper on the 2nd October 20102. In another incident on the 19th November 2010, three Mat Rempit were killed while racing, with one decapitated and his left hand severed when they collided into each other during a race. The three were performing stunts and lying flat on their machines while travelling at 100km per hour when the fatal collision occurred. These three were part of an illegal motorcycle racing gang6.

What to do if your friend is a Mat Rempit?

If your friend is a Mat Rempit, you have two choices. One is that you try to give him advice regarding the risks involved in being a Mat Rempit – accidents, incurable diseases, and death. You can let your friend know that being Mat Rempit is not simply taking part in illegal street racers, one can become sucked into the Mat Rempit culture – the bullying, the robbing and thieving, the free sex, drugs and alcohol. You can try to remind your friend that he or she has a bright future ahead of him or her, if only they try to participate more in school and in positive activities. You can even suggest to your friend to take part in legal racing in specially determined racing circuits where it is safer for himself and for others.

However, if you find your friend is trying to influence you to join in his Mat Rempit activities, and you find yourself tempted to join him day by day, then the better course of action would be to distance yourself away from this Mat Rempit friend, and find other friends who are engaging in more positive activities in school and be friends with them instead. If you are tempted to try, then that is the time to tell yourself, ‘STOP’, and break away from this Mat Rempit friend who is trying to convert you to become like him or her. Find friends who are taking part in positive activities in school, and doing well in school, so that you can become positive and successful too.

What do you do when you are a Mat Rempit yourself?

Reflect on your life. Look at what you are doing day to day and think to yourself: Is this what my mother hoped and prayed that I would be? Is this what my father wished and hoped that I would be? Do I love my family? Do I love myself? Perhaps if you reflect enough, you can and will be able to make a change in yourself. Try to distance yourself away from your Mat Rempit Gang, and try to find new friends who engage in more positive activities and who could help you catch up on your studies in school. If you love the speed and danger so much, perhaps you could try to take part in legal, organized races held at designated racing circuits in Malaysia. Then the activity of racing is more organized, and is safer as you would be wearing safety racing gear, and would not potentially harm other users on the public road. Reflect, make that change. You can do it, keep telling yourself that.

What can you do as a person to promote safe driving and safe behavior?

If you are of the legal age to drive, learn how to drive safely from a reputable driving school, and try to follow the road rules and regulations at all times. Advise you parents and family members on safe driving. Advise your friends as well. If your friends ask you to join them in an illegal street race, learn the art on how to say ‘NO’, firmly and nicely. You have a right to determine what you want to do with your life. Make the right choice, make the wise choice, say ‘No’ to Mat Rempit and illegal street racing. 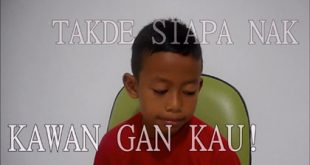