Wilms’ tumour   is a solid tumour of the kidney that arises from immature kidney cells. It is  the most common primary malignant renal tumor in children and the fourth most common type of cancer in children .It was  named after Dr Max Wilms, who first described it in 1899.Wilms’ tumours usually only affect one kidney (unilateral) but in about 7 out of every 100 children  it can affect both (bilateral).

When a baby is growing in the womb, there are special cells called metanephric blastema that is involved in the development of the child’s kidneys.   These cells normally disapper at birth but in some children these cells may persist. Wilm’s tumour is thought to grow out of these metanephric blastema.

The kidneys are a pair of organs found at the back of the abdomen. They filter the blood by removing waste products such as urea and salt, and water which are then passed to the urinary bladder where they leave the body in the form of urine.

The annual incidence rate of Wilms’  tumor is about 7-10% cases per million of 15 years. This account for 6-7% of all childhood cancers. Wilm’s tumour almost exclusively in children. Majority are diagnosed before 5 years of age with a median age of 3.5 years. 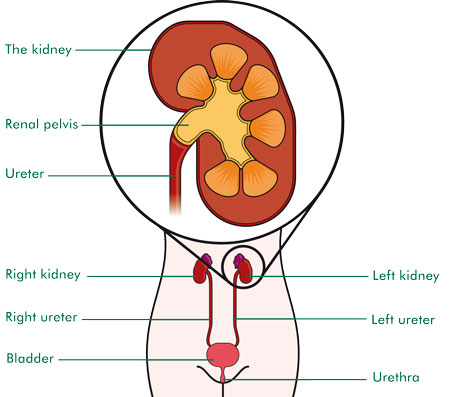 Structure of the kidney

In most cases, the cause of Wilms’ tumour is unknown. However, it is believed to occur as a result of changes in 1 or more genes. Several types of birth defects or congenital anomalise appear to be associated with the occurrence of Wilm’s tumour. Children with these anomalies should be screened regularly for Wilm’s. About 15 out of every 100 children who develop a Wilms’ tumour also have a birth defect.

Most birth defects associated with Wilms’ tumours happen in syndromes. A syndrome is a group of symptoms and abnormalities that are present in the same person. Gene mutations affect all body cells. So this explains why children born with one of these syndromes can have several parts of their body affected and not just their kidneys.

The main ones are:

In addition 1 in  100 people with Wilms’ tumour  may have a family member with Wilms tumour . These patients usually presented early and has an increased risk  of bilateral disease.

How Wilms Tumour is diagnosed?

The doctor will carry out a physical examination. If Wilm’s tumor is suspected, several investigations will be performed. These include :

The stage of a cancer is a term used to describe its size and whether it has spread beyond its original site. Knowing the stage of the cancer helps doctors decide on the most appropriate treatment.

A commonly-used staging system for Wilms’ tumour is described below.

The tumour is confined to the kidney and has not begun to spread. It can be completely removed with surgery.

The tumour has begun to spread beyond the kidney to nearby structures such as surrounding fatty tissue, but it’s still possible to remove it completely with surgery. No lymph node involvement

The tumour has spread beyond the kidney; either because the tumour has burst before (or during) the operation, has spread to lymph node or has not been completely removed by surgery.

There are tumours in both kidneys (bilateral Wilms’ tumour).

If the tumour comes back after initial treatment, this is known as recurrent cancer or relapse.

Children with cancer should be treated at specialised centres which are familiar with the management of paediatric caners. The treatment involves a multidisciplinary team which include the paediatric oncologist, paediatric surgeon, paediatric radiologist and radiotherapist as well as pathologist, medical social worker and dietitian.

Treatment will depend on a number of factors including how the cells appear under the microscope (histology) and the stage of the tumour. Treatment includes surgery, chemotherapy and/ or radiotherapy.

In about 1 in 20 cases, Wilms’ tumour affects both kidneys. Treatment usually involves surgery to both. The aim of the treatment is to remove as much of the cancer as possible, while leaving as much healthy kidney as possible. Chemotherapy is always given. Sometimes radiotherapy is needed as well.

Side Effects of Treatment

Chemotherapy and radiotherapy carry a risk of side effects, which may be immediate or long-term.

Side effects can include feeling sick (nausea) and being sick (vomiting) , hair loss, bruising and bleeding, tiredness, diarrhoea and an increased risk of infection.

A small number of children may develop late side effects.. These include a possible reduction in bone growth, a change in the way the heart and lungs work, and a slight increase in their risk of developing another cancer in later life. Infertility is a possible late side effect, although this is rare.

Improvement in the diagnosis and treatment of Wilm’s tumour has improved the outlook or prognosis of children with this disease. In general, the prognosis of this tumour is very good. The cure rate for Wilm’s tumour of good histology now exceeds 90%.