Urinary tract infection (UTI) is an infection of the bladder or kidneys usually caused by bacteria.

About 3% of girls and 1% of boys have had a UTI by the time they are 11 years old. Some children may have an abnormality of the kidneys or bladder which caused them to have repeated episodes of infection.

It is important to treat and prevent UTI in children because it can damage the kidneys.

When must one suspect that a child has UTI?

UTI is associated with the following signs and symptoms :

Why can UTI be dangerous?

How should UTI be treated?

Is there anything that can be done to prevent a recurrence of UTI? 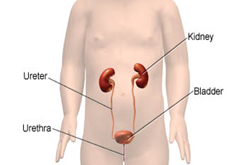