Are you the kind of person who does not like to socialize? Do you have a friend or a child who keep their feelings to themselves? If you answered yes, you might be dealing with individuals with sensitive personality.

According to the definition of Psychology Encyclopedia, personality refers to the distinctions in forms of thinking, emotions and behavior. Personality is also defined as a pattern of behavior and the enduring reactions of an individual towards changes in the environment.

Personality is a person’s characteristics that involve his behavior and actions. It also represents the person’s traits. It is the impression that is given by a certain individual about himself or herself to others. In other words, personality refers to the person’s social skill or how a person is successful in garnering positive reaction from other people in various settings.

According to Allport, personality is a dynamic organizational system in psychology and physicality in a person that determines his or her unique adaptation to the environment. Meanwhile, Professor Datuk Mahmood Nazar defines personality as the characteristics possessed by an individual in the way that they think, react, feel  and perceive that differentiate them from others.

Psychologists have found that individual’s personality types are indeed varies. The fact is proven through various research conducted on personality traits.

Allport recognizes individual’s personality as the result of biological and environmental factors. Meanwhile, inherited traits are shaped by the experience of the individuals. According to Eysenck, personality is the organization of character, conduct, intellect and stable body structure that determines unique adaptation to the environment.

According to Carl Jung’s theory of personality, a person’s trait is influenced by one of these alternatives :

Based on the above theories, sensitive individuals behave introvertedly. Introverts are more concerned with inner thinking. They are more likely to keep their feelings to themselves and are often quiet. They prefer to think and act according to necessity.

Below are the traits of sensitive individuals:

Understanding How to Interact with Sensitive Individuals

Sensitive individuals are introverts. Therefore, in order to interact with them there are certain aspects that must be taken care of.

Sensitive individuals possess a lot of introverted traits which causes them to be misunderstood and negatively viewed by the society. They are often labeled as arrogant as they are not talkative and love to isolate themselves. They are uncomfortable in working in groups and perform best working by themselves.

They are also categorized as slow witted, stupid and have low self-confidence. This is because they require time before talking and giving their opinions. Sensitive individuals also prefer to communicate in written form compared to oral communication. They are also slow in giving reactions and in acting as they need to think before they act.

This type of individuals are not fond of attending ceremonies or public gatherings that involve a lot of people especially strangers. They are very careful in selecting friends and have few good friends with a number that can be counted with only one hand. Due to this fact, they are often labeled as shy individuals who lack socials skills and cannot socialize within society.

Sensitive individuals are easily touched and cried. They are also easily offended and sulk if there is a faulty interaction such as when people say the wrong things or talk in a harsh manner. This causes other people to avoid and distance themselves from these sensitive individuals.

Mental illnesses are disturbances that involve changes in thinking, emotions and feelings and behavior that cause a person’s inability to face challenges in daily life.

Normally, a sensitive person has a negative self-view, negative view towards the environment and the future. They often see themselves as useless and inadequate. They also consider themselves as unlovable and always feel that they have failed with an unpromising future.

They often feel restless, anxious and worried excessively especially towards matters that are beyond their control. Furthermore, they often spend their time predicting future problems and how to deal with them. They evaluate themselves lowly and often feel incapable in executing certain matters.

In order to decrease the symptoms of mental illness, sensitive individuals must learn the skill to maintain a harmonious relationship with others, the ability to participate in societal activities and the ability to contribute to the society.

Sensitive individuals must learn to respect and appreciate themselves. They have to be able to determine their own strengths and weaknesses. They also have to learn to accept their failures and frustrations and able to control their feelings. They have to learn handling situations to achieve satisfaction in their daily life.

Sensitive individuals also have to appreciate and trust others. Learn to accept others’ opinion openly also understand and respect the differences. Avoid taking advantages of others. Instead, learn to give and receive love. To communicate effectively to build a good and lasting relationship.

Sensitive Individuals must use their abilities in order to face challenges and to cleverly overcome conflicts. They must accept new experiences more openly. They also have to set a  realistic self-purpose and be brave in accepting responsibilities given. Be able to face and resolve problems and arising stress and be able to make decisions.

In conclusion, everyone’s personality is unique. The most important thing is to accept ourselves realistically and make smart plans of changes in life. It is not a loss for a sensitive person to work hard in order to make changes for their own good and also the people around them. However, it is important to respect each other’s’ differences and tolerate so that a harmonious relationship can be maintained. 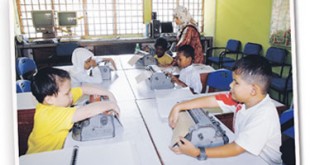 Role Of Speech-Language Therapist In School