Since the birth of Louise Brown on 25 July 1978 and the subsequent onset of assisted reproduction in the human, scientists and clinicians were more urged to improve sperm separation techniques as the percentage of andrological cases increased rapidly and thus, a wide array of different laboratory techniques focusing on the selection and enrichment of motile and functionally competent spermatozoa from the ejaculate were developed.

During processing, viable sperm cells are first separated from other constituents of the ejaculate as early as possible. The World Health Organization (WHO) recommends separating sperm cells from the seminal plasma within one hour after ejaculation to limit damage from leukocytes and other cells (including abnormal and dead sperm) present in the semen.

History and the Objectives of Sperm Preparation

The first sperm separation methods available only comprised of one or two washing procedures with subsequent resuspension of the male germ cells. Mahadevan and Baker (1984) then described a single wash followed by a swim-up procedure from the cell pellet. Following these reports, more sophisticated methods were developed to obtain sufficient amounts of motile, functionally competent spermatozoa for IVF.

Apart from a simple wash and subsequent resuspension of the male germ cells, the swim-up from a washed pellet is the oldest and most commonly used sperm separation method. This method is still used largely in IVF laboratories around the world. If the liquefaction of the semen sample in normal, centrifugation is not necessary and a layer of media can be added on top of the liquefied semen.

The methodology of this conventional swim-up is based on the active movement of spermatozoa from the prewashed cell pellet or liquefied semen into an overlaying medium. Typically, the incubation time is 60 minutes.

Listed below are the advantages & disadvantages of direct swim-up technique: 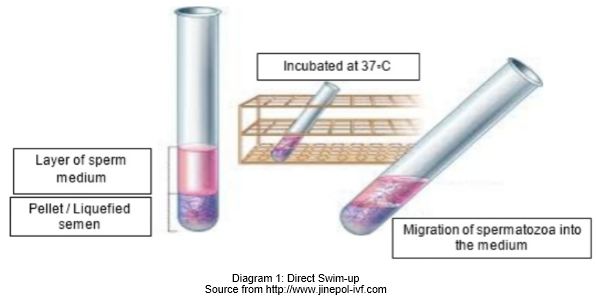 The typical methodology for the density gradient centrifugation comprised continuous or discontinuous gradients. The ejaculate is placed on top of the density media with higher density and is then centrifuged for 15–30 minutes. During this procedure, all cells reach the semen sediment. However, highly motile spermatozoa move actively in the direction of the sedimentation gradient and can therefore penetrate the boundary quicker than poorly motile or immotile cells, thus, highly motile sperm cells are enriched in the soft pellet at the bottom.

Listed below are the advantages and disadvantages of density gradient centrifugation method :

In the simple wash method, following complete liquefaction, culture medium is added to the ejaculate and centrifuged twice to remove the seminal plasma. It is essential to use lower centrifugal forces (less than 500 g) and fewer centrifugation steps to minimize the damage caused by formation of reactive oxygen species (ROS) by non-viable spermatozoa and leukocytes. Increased levels of ROS result in DNA damage in spermatozoa, decreased sperm motility, increased numbers of apoptotic spermatozoa, and decreased sperm plasma membrane integrity.

The simple wash technique is usually used when the semen sample has severe parameters because it produces very high yields of spermatozoa.

Listed below are the advantages and disadvantages of simple wash technique: