Role Of Laboratory In Acute Poisoning

Acute poisoning is the exposure to a poison on one occasion or during a short period of time. Poison is any harmful substance that injures the health or destroys life when absorbed into the system. Types of poisoning can be categorised as the following:

Malaysian Ministry of Health cited that the fourth highest admission and death in 2009 & 2010 was due to toxic effect of substances mostly from non medicinal source. This is followed by poisoning by drugs, medicaments and biological substances. The death rate from total admission in 2009 and 2010 for the above categories was 1.25% and 1.20%, respectively. According to Malaysian National Poison Centre, the most common drugs involved in poisoning are paracetamol and salicylate. Other studies also listed paracetamol, salicylate, benzodiazepines and antidepressants as the most common self-poisoning agent among the adults.

In a study at Hospital Pulau Pinang suggested that the annual incidence rate of poisoning admission was estimated to be 25.2 per 100,000 persons. The highest admission was observed in female adults, intentional in nature and commonly involving over-the-counter medicine. The accessibility of over-the-counter medicine and low cost, contribute to the risk of poisoning in our daily life. Medicine taken beyond the recommended dose is toxic and harmful to the biological system of human being (Table 1). Paracetamol (Brand name Panadol) is an analgesic drug commonly used to relieve fever and pain. It can cause serious or fatal adverse effects at around 150 mg/kg for many adults.

Role of the Laboratory in diagnosing acute poisoning

Laboratory tests are carried out to determine the type and amount of poison in the body. These tests are known as clinical toxicology tests and can be defined as the analysis of drug or poison in human biological fluids for the purpose of patient care. Diagnosis and management of acute poisoning requires close collaboration between analytical toxicologist, pathologist and clinician.

Use of laboratory investigation in managing acute poisoning

Several tests are routinely requested by the clinician for patients suspected of poisoning or drug overdose. The general routine chemistry tests such as blood gases, electrolytes, glucose, urea nitrogen, liver function test, prothrombin time, urinalysis and osmolality are available to asses metabolic and organ function as well as anion gap and osmolal gap. In addition to more specific tests to detect and quantify the poison are also offered by the laboratory. These tests are important for the intervention especially for drugs with specific antidotes. For instant, the paracetamol level is required for the treatment with its antidote N-acetylcysteine to prevent liver damage.

Many poisoning and overdose cases can be adequately managed without quantitative analysis. However, quantitative analysis is important in patient evaluation for medicolegal purpose, for effective treatment, to determinate the time frame for re-initiation of therapy and also as guidance in therapy selection for patient treatment. A qualitative test result is reported as either positive or negative. For example, a urine paraquat test is reported as positive if paraquat is detected in the urine and vise versa. On the contrary, a quantitative test is reported as an exact measurement and is assessed in context to a reference range of values. The same urine paraquat tested qualitatively for positive result can be further tested using sophisticated analyzer to determine how much of paraquat is present in the sample (Figure 1).

The most common type of specimen for diagnosis of poisoning is blood. Blood sample is able to detect and quantify the circulating drugs and toxic substances. There is good correlation between blood level and toxicity. It provides useful information for test such as paracetamol, salicylate and alcohol. Urine may also be used to detect poisoning especially for cases suspected of paraquat poisoning or drug overdose. Urine test are usually qualitative as drug concentration in the urine correlate poorly with clinical effects. However, most drugs remain detectable for much longer periods in urine than in blood. Some substances are detectable only as a metabolite in urine. The detection of a substance in urine however does not necessarily mean that this is the cause of the poisoning since it may have been taken days before the event and may not be related to the acute situation.

A number of technologies are available in the market to quantify the toxic substances in the blood and urine sample. Examples of existing technologies are immunoassay, gas chromatography (GC), high performance liquid chromatography (HPLC), mass spectometry and atomic absorption spectrometry (AAS). In the laboratory setup, drugs and poisons are classified based on the method used for extraction. In most toxicology application, 3.0 mL of blood in recommended preservative container that has been allowed for clot for several minutes is centrifuged to obtain clear serum. The serum which is devoid of red blood cells and coagulants is aspirated and subjected to analysis using any of technology mentioned (Figure 2 ).

Emergency toxicology service offerring tests such as paraquat, paracetamol and salicylate are available in most government hospitals.This service is offered by the Department of Pathology. The service is available for 24 hours (Figure 3). Clinician should be able to get the results within one hour of the specimen’s arrival time to the laboratory. In some hospitals additional tests such as ehtanol, serum benzodiazepines and drugs of abuse are also provided. Tests to determine overdose of prescribed drugs are also carried out and is done either in the Department of Pathology or Pharmacy. 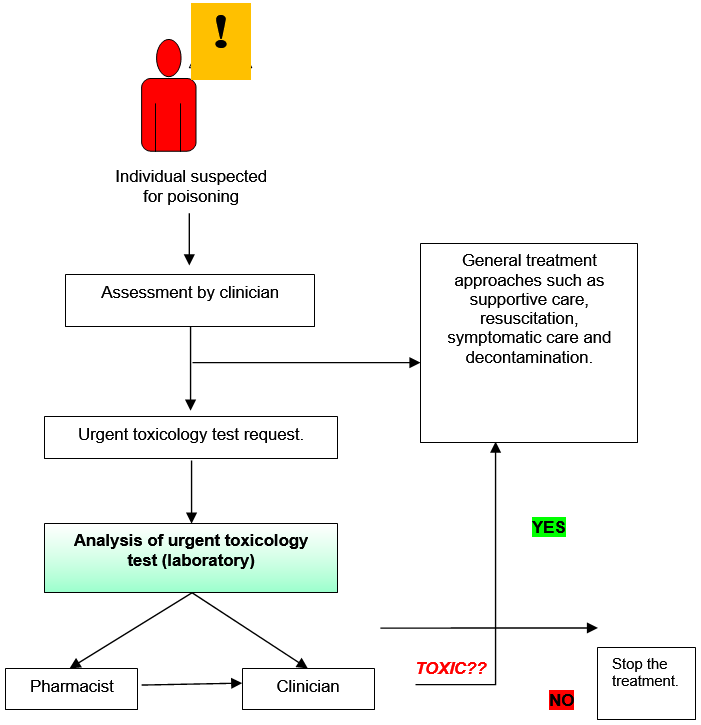