Ringworm or scientifically known as Tinea versicolor is a type of skin infection caused by fungi from the genus Malassezia spp. Ringworm infection usually occur in the tropics and sub ??- tropics countries and can be seen not only in humans but also in animals. Ringworm causes crusted rash and it is visible on the surface of skin such as on the face, feet and other parts of the body which frequently produced sweat. Ringworm infection is characterised by well-demarcated white, pink or brown patches on the skin. Factors that can causes ringworm includes hot and humid weather, excessive perspiration and oily skin.

There is a lot of information available related to ringworm but information regarding the fungal that caused infection is not widely discussed. Due to this, information on fungus which caused ringworm need to be disseminate so that this disease can be avoided and handled properly.

Figure 1: Ringworm shape on skin surface of a) Back body; b) face.

The Malassezia spp. cell diameter is approximately 2-8 µm depending on the species. In addition to the thick cell walls which has the thickness of 0.12µm , this fungus cells are surrounded by a layer rich in lipids and form a capsule which has a role in the pathogenesis. The composition of the cell wall are 70 % carbohydrates 10 % protein and 15-20 % lipid layer.

It is easy to diagnose Tinea versicolor by naked eye, there will abnormal appearance such as white, pink or brown crusted patches on the surface of the skin. The existing diagnostic tests in microbiology laboratory may aidthe doctors to identify fungi that cause infection. Laboratory Tests carried out include Direct Microscopic examination by potassium hydroxide (KOH) method. KOH is used to dissolve the structure of keratin on skin, hair and nails. Skin samples are taken from patients infected with Malassezia spp. will show spaghetti and meatballs characteristic in blue as shown in Figure 2 below. Microscopic examination by scotch tape method can be performed using cultured fungus on a growth media and stained using methylene blue staining as shown in Figure 3.

Diagnostic tests conducted in the laboratory is important in identifying the type of fungus that infects human skin. It is also crutial to determine the species by culturing it onto a growth media. The fungus can survive when there is additional lipid content on the media because they can’t produce their own lipid. There are various types of lipid used to meet the needs to grow Malassezia spp such as olive oil, fatty acids (tween), milk and also glycerin. Some examples of growth media used to culture this fungus is Dixon media and Leeming & Notman Media. 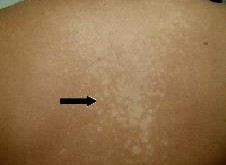 What Is Pityriasis Versicolor