Ptosis is drooping of the upper eyelid. The lid may droop only slightly, or it may even cover the pupil entirely. In some cases, ptosis can restrict or even block normal vision. Ptosis may affect one  or both eyes.

Ptosis occurs when the muscles (levator and superior tarsal muscles) that elevate the eyelid are not strong enough to do so.

In adult the most common cause of ptosis is the separation or stretching of the levator muscle from the eyelid. This process may occur as a result of aging, after intraocular surgery or following chronic inflammation of the eye. Also wearing contact lenses for long periods of time may induce ptosis.

Ptosis due to trauma can ensue after an eyelid laceration with transaction of the upper eyelid elevators or disruption of the nerve supply to the muscles.

Ptosis may also occur as a complication of other diseases involving the levator muscle or its nerve supply (3rdcranial nerve), such as diabetes mellitus, brain tumour, neurological and muscular diseases and tumours of the eye lid and orbit.

However ptosis has also been found to be associated with numerous other conditions such as  :-

Marcus-Gunn jaw–winking ptosis. It is due to abnormal innervations connecting two groups of normally unrelated muscles. This  will stimulate the action of the two groups of muscles which are not related, for example the upper eyelid elevates  when the mouth is open.

Horner’s syndrome. It is due to damage to the sympathetic nerve characterized by mild ptosis, miosis and anhidrosis. Horner’s syndrome may  be congenital or may reflect serious disease in the neck or chest or following certain treatment. The lower eyelid on the same side of the ptotic eye may be elevated as well. Also because of the lack of sympathetic supply to the iris melanocyte, heterochromia (iris colour difference) may exist.

Myasthenia gravis. It is anautoimmune disease where there is  a defect at the neuromuscular junction that produces unresponsiveness to released acetylcholine, resulting in ptosis. Ptosis tends to be variable through out the day. Further testing needs to be done to confirm the diagnosis.

The drooping eyelids will narrow the eye opening and the affected eye will look smaller. The droop may be barely noticeable or may descend to cover the pupil entirely and limit vision. If the ptosis covers the pupil the patient will try to compensate unconsciously by raising their eyebrows. This will give your eyes an odd surprise appearance.

If ptosis occurs as a complication of other diseases the patient may have additional symptoms that are related to the underlying illness.

The Ophthalmologist will determine the cause of the ptosis and plan the best treatment.  If treatment is necessary, it is usually surgical.

The main objective of the surgery is to elevate the upper eyelid and improve the patient’s vision and field of vision. The ophthalmologist will also try to make both upper eyelids symmetrical.

If the ptosis is caused by other illnesses such as muscle diseases, neurological problem or local eye problem ,the doctor will treat the illness. In some cases this treatment either improves the drooping eyelid or prevents it from getting worse. 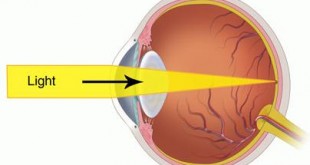