Progesterone only pills (POP): it contains only progesterone in each tablet and provides an alternative when estrogen is contra-indicated in an individual. It comes in strip of 28 pills and 1 pill is taken daily. POP is a suitable choice of contraceptive for mothers whom are breastfeeding.

OCP work by changing the hormone level in the body and prevent ovulation where no egg is released from the ovary. It also acts by thickening mucus in the cervix to reduce the chances of sperm entering the uterus and also thins the uterus lining making it difficult for the egg to attach. It is important to note that OCP has to be taken daily, preferable at the same time for it to work effectively. Noncompliance or missed pills would lead to failure of its contraceptive effect.

OCP are attractive drugs that are susceptible to be misused as they are readily available in the market. The term misuse means improper use. Hence, misuse of OCP simply means that OCP are used improperly; or used for other purposes other than its intended indication; or used longer than its intended duration without any medical advice. Improper use like not taking the OCP correctly is also considered as misusing the pill.

There are various types of OCP available in the market. Different types of OCP would suite different individuals depending on the person’s weight, family history, medical history, social history and etc. The estrogen content in OCP may not be suitable or even contraindicated in some individuals. There is also various type of progestogen available in the OCP and each has different properties that would suite different individuals. Hence, it is always best to check with a doctor or pharmacist for the best suited OCP to avoid any unwanted consequences. OCP initiated without seeking medical advice would be considered as misuse.

Example of misuse; Repeated use of emergency contraceptive pills / Reason of use to enhance femininity

The simplest example of misusing OCP is simply not taking the pill accordingly. OCP are designed such that it has to be taken daily and preferable at the same time to maintain the hormone level in the body. Missing any pill will reduce its contraceptive effects and chances of getting pregnant will be higher.

Self-treatment of medical conditions like dysfunctional uterine bleeding, PCOS and etc. with OCP without consultation from a doctor is a form of misuse of OCP. Upon initiation of OCP for these circumstances, a thorough personal medical, social and family history should be obtained and physical examination by the doctor should be conducted. Meticulous attention should be given if individual is present with conditions like hypertension, migraine, or personal or family history of blood clot.

Self-prolonging treatment with OCP without doctor’s advice is also labeled as misuse. In most cases, OCP are usually not taken on a long term basis. For example, if OCP is initiated for dysfunctional uterine bleeding and bleeding still persist after a few courses of OCP; further investigation should be done to identify the underlying cause and one should not continue taking the OCP without doctor’s advice.

As OCP contains estrogen, the female hormone, there is often misconception that taking OCP would enhance femininity. Some women would take OCP on a long term basis hoping for lasting beauty, youth and femininity. Some may even take over-normal dose of OCP to abuse the estrogenic properties of OCP for reason of feminine attractiveness, female libido, flawless skin and more. Consuming OCP for these reasons is definitely misusing the pill. Long term use of OCP or over dosing OCP would expose individual to various side effects and complications.

Effects of misuse (example use at young age)

The most common effect of misuse of OCP is contraceptive failure. When OCP is not taken correctly, chances of unexpected pregnancy are higher. Unfavourable side effects like irregular menstruation due to irregular hormones in the body are likely to occur as well.

One of the most important complications related to the use of OCP concerns the blood system and the condition is called venous thromboembolism (VTE). VTE is where blood clot is formed in the veins and the clot may break off and travel to the lungs causing a life threatening condition. The incidence of VTE in woman taking OCP increases 3 to 5 fold compared to healthy women who are not taking OCP. The chance of VTE further increases if other risk factors are added.

Thus, OCP should be used with caution in woman with the presence of risk factors like family history of blood clot, obesity (body mass index above 30kg/m²), long term immobilization (for example in a wheelchair), diabetes, hypertension, smoking, age over 35 years, obesity and migraine. If OCP is misused in this group of woman, the consequences could be serious where woman are at high risk of blood clot in the leg or lungs, stroke and heart attack.

Common side effects of OCP include nausea and vomiting, abdominal cramps, changes in body weight, fluid retention, hypertension, high cholesterol, headache, depression, heavy vaginal bleeding between periods and others. Women should be made aware that if any of these side effects occur while taking OCP, they should speak to their doctor of pharmacist.

OCP works by suppressing the natural process of ovulation. This can disrupt the natural process of reproductive functions in women causing side effects like pain, discomfort, mood and psychological changes and depression. Some unlucky woman may even further develop reproductive problems in their child bearing age. Thus, particular attention should be paid in younger generations who intend to initiate OCP. They should be counseled regarding the use of OCP including emphasizing the positive effects of OCP when they are used correctly and also the side effects of misusing OCP. Anticipatory guidance regarding the common side effects should be included as well.

All women should be educated to know the right way of using OCP by simply understanding the principle of how it works, what are the side effects and also what are the risks of misusing them. Women should be counseled before initiating OCP and those who are not suitable to take OCP should op for other safer contraception methods which pose lesser danger to their health. 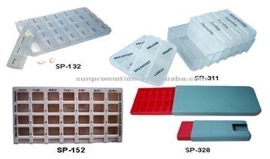 Compliance to Your Medicines