The reproductive system of the female, unlike that of the male, shows regular cyclic changes that may be regarded as periodic preparations for fertilization and pregnancy. Menstrual cycle is the cycle of changes that occurs in the uterus and ovary for the purpose of sexual reproduction. When menstruation (periods) come regularly, this is called the menstrual cycle. A cycle is counted from the first day of menstrual bleeding to the first day of the next period. In humans, the length of a menstrual cycle varies greatly among women (ranging from 25 to 35 days), with 28 days designated as the average length. The length of the period also varies. The usual duration of the menstrual flow is 2-8 days. The rise and fall of levels of hormones during the month control the menstrual cycle.

During the first half of the menstrual cycle, the endometrium (the lining of the uterus) is stimulated by the rising levels of oestrogen. The oestrogen produced by developing follicle in the ovary under the influences of Follicle Stimulating Hormone (FSH) from the pituitary, which is part of the brain. The edometrium becomes progressively thicker. This is called the proliferative phase. During the second half of the cycle, progesterone from the corpus luteum causes the endometrium to increase further thickness. Corpus luteum is a collapsing or empty follicle in the ovary after releasing of the egg (ovulation). At the same time, the blood supply increases and the glands in the endometrium secrete nutritious mucus, in preparation for implantation if the egg has been fertilized. This is called the secretory phase. If pregnancy does not occur, the corpus luteum degenerates, the levels of progesterone and oestrogen in the blood fall and the endometrium is shed. Menstruation has been likened to the “tears” of a frustrated uterus!

Each oocyte (egg) is contained in a fluid structure called a follicle. During this phase, growth of the ovarian follicle occurs in response to the FSH. At the start of the menstrual cycle, the follicle is minute but at the time of ovulation, it has a diameter of 18-26 mm. As the follicle starts to grow, the oocyte (egg) enlarges and in the 36 hours immediately before its release from the ovary, it undergoes a major process of maturation. This process is set in train by the mid-cycle surge of LH, which causes ovulation a few hours later. Under the influence of several hormones only one dominant follicle in the ovary will continue to maturity. The follicle that reaches maturity is called a tertiary, or Graafian follicle, and it contains the ovum.

The sudden rise in the level of LH (LH surge) at mid- cycle triggers ovulation. A tiny opening appears on the surface of the follicle, a little follicular fluid escapes and the egg is extruded and picked up by the fimbriae of the fallopian tube. The chance of either ovary ovulating in any one month is entirely random. In some women, ovulation features a characteristic pain called mittelschmerz. The sudden change in hormones at the time of ovulation sometimes also causes light mid-cycle blood flow.

This is determined by the functional life-span of the corpus luteum. During the luteal phase, the pituitary hormones FSH and LH cause the remaining parts of the dominant follicle to transform into the corpus luteum, which produces progesterone, through it also produces oestradiol. Irrespective of the length of a normal ovulatory cycle, this phase remains relatively constant in duration (average 14 days- range 11 to 17 days). The hormones produced by the corpus luteum also suppress production of the FSH and LH. Consequently, the level of FSH and LH fall quickly over time and the corpus luteum subsequently atropies. Falling levels of progesterone trigger menstruation and the beginning of the next cycle. 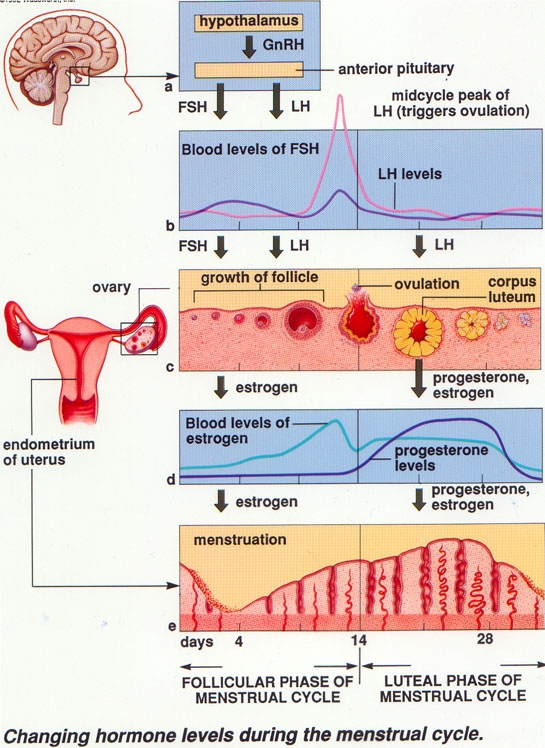