Medical Records Management efficiently in a hospital is emphasized in order to reduce the waiting time to keep track of patient records, facilitate the process of preparation of medical reports, can track the location of the Medical Record Patient, ensure continuity of care, isolation record inactive for disposal easier to perform also had misfile record medical deductible.

According to a letter from the Medical Development Division Bil.KKM 87 / P1 / 11/1 (90) dated February 9, 2007 issued by the Ministry of Health has ordered the management of Patient Medical Record using MTDFS (Modified Terminal Digit Filing system) implemented in all hospitals / institutions of the Ministry of Health over the term of the 9th Malaysia Plan (2006 – 2010).

Concept Of Ministry Of Health

One Patient One Folder ‘or’ Single Folder’ in accordance with the Circular of the Director General Health Bill. 3/2005 Guidelines on Medical Records For Hospitals Ministry of Health Medical Records means all about the care and treatment of patients is stored and recorded in a folder even if the treatment is given by a multidisciplinary include inpatient and outpatient records. Outpatient Records is a record of professional clinics, not including patient records outside of the Outpatient Department and the Emergency Department.

MTDFS concept allows folders filed evenly into the compartment where NRIC read from right to left as shown below:

i. Arrangement File Inside The MTDFS RCC

Arrangement From Right To Left

Arrangement From Left To Right 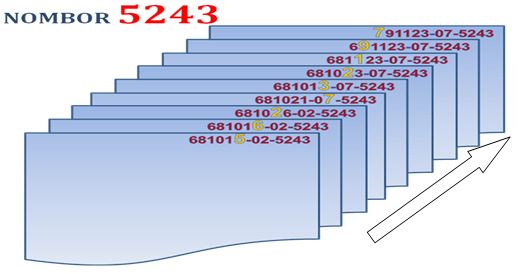 Color Code To Be Used For Medical Record Folder

10 color codes of the numbers 0 through 9 has been selected by the Ministry of Health as follows: 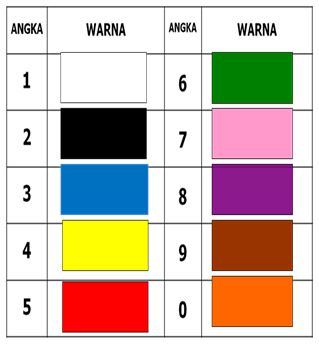 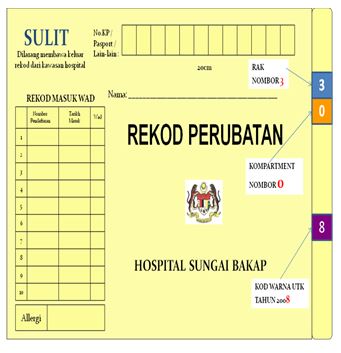 B. The Filing Of A New Patient Record

Quality of medical records management requires the cooperation of all parties. Medical Records Unit at the hospital was given the mandate and the responsibility to ensure the success of Medical Records Management and Filing in accordance with the ‘Modified Terminal Digit Filing System’ (MTDFS). Members of the Medical Records Unit needs the support and approval of the Director of the Hospital of the financial allocation in the purchase of the patient folder, label and color code the payment of overtime, including the cooperation of specialist clinics in the success of this program. 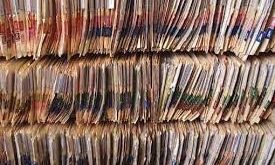