Infected persons will suffer respiratory symptoms and a rash. It is highly contagious and spreads by air through droplets from the mouth, nose or throat when an infected person speaks, coughs or sneezes.

However, most children in Malaysia are immuned to measles since the implementation of measles immunization programmed.Despite this, recently we are seeing new cases in major cities as result of influx of foreigners/immigrants. Therefore any child, who is not vaccinated yet and are exposed to others with this disease, will probably get this disease.

What are the features of measles?

It takes about 10-12 days after contact with a contagious infected person for the symptoms to start. The symptoms begin with:

Two to three days later, a red blotchy rash appears, first on the face and neck, then it spreads to the trunk and limbs. The rash will last for four to seven days. When rash appears fever is usually at its height.

The time the symptoms start until the rash fades will last for 10 -14 days. Measles is contagious for about four days before to four days after the rash begins. 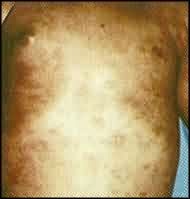 Is fever and rash in a child always measles?

Infections with other viruses are often also associated with fever and rash. Measles is often however confused with Roseola Infantum which is due to another virus which typically has the same features as Measles except when rash appears after 2-3 days the fever usually subsides. Another disease that resemble measles is rubella (German measles).

What is the usual outcome of a child with measles?

Although most children with measles will recover, serious complications can occur.

Young infants, malnourished children are at higher risk for complications. It is also a serious illness in those with a weakened immune system.

Death may occur in severe cases. Measles in pregnant women can cause miscarriage and premature delivery

How should measles be treated?

There is no specific treatment for measles. The symptoms are usually relieved by:

The rash requires no treatment and it will disappear by itself.

An infected person should stay home until no longer contagious (about four days after the rash appears).

Can we prevent measles?

Measles is a preventable illness. Measles vaccine, included in the MMR (Measles, Mumps and Rubella) vaccination, is recommended at 12 months old and later at seven years old in Malaysia

It is very important that parents bring their children promptly to be immunized.

MMR is a safe vaccine.

If your child is exposed to someone who has measles (and not immunized yet) consult your health care provider immediately. Giving vaccine within specific time might prevent child who is exposed from getting the disease.