Klinefelter syndrome is a chromosomal condition that affects males, whom are born with at least one extra X chromosome (Figure 1). Chromosomes, found in all body cells, contain genes. Genes provide specific instructions for body characteristics and functions. For example, some genes determine skin color and hair growth. Other genes influence language skills and reproductive functions. Each person has 23 pairs of chromosomes consists of 22 pairs autosome and one pair of sex chromosomes (that determines one’s gender). Female has two X chromosomes (XX), while male has one X chromosome and one Y chromosome (Y) which makes an XY in them. Most males with Klinefelter syndrome, also called XXY males, have two X chromosomes instead of one. The extra X usually occurs in all body cells. Sometimes the extra X only occurs in some cells, resulting in a less severe form of the syndrome (called mosaic Klinefelter syndrome). Rarely, a more severe form occurs when there are two or more extra X chromosomes (For example 48,XXXY and 49,XXXXY). 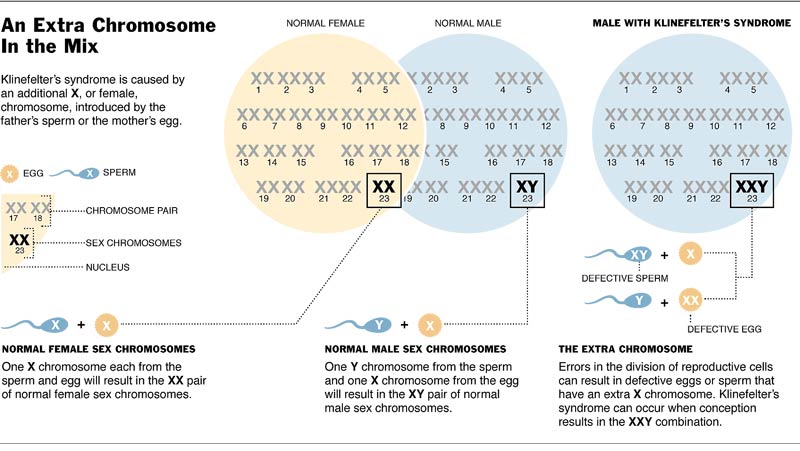 Klinefelter syndrome is the most common sex-chromosome abnormality, affecting about one in every 500 to 700 men. Klinefelter syndrome was first discovered in 1942 by a young doctor in Philadelphia called Harry Klinefelter. He described 9 men who had breast development, small testicles with no sperm in their semen, and a blood test revealed raised levels of gonadotrophins which try to produce more of the male hormone (testosterone) and greater numbers of sperm. In 1959 it was shown that these changes resulted from the presence of an extra X chromosome in each of the cells of the body in males with Klinefelter syndrome.

Although the testes have reduced function, almost all boys with Klinefelter syndrome are male in appearance. 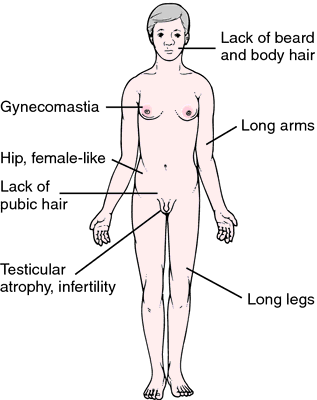 What are other Health Problems Linked to Klinefelter Syndrome?

Klinefelter syndrome can lead to:

Because Klinefelter syndrome is a genetic disorder, it cannot be prevented. It occurs due to non- disjunction during meiosis. The condition isn’t usually diagnosed at birth, because the baby boy looks healthy and unaffected. However, certain physical characteristics sometimes associated with Klinefelter syndrome may be apparent, including small penis, undescended testicles, hypospadias (the urethra is located on the underside of the penis instead of the tip). Klinefelter syndrome can be diagnosed using genetic testing prenatally or later. Once it is diagnosed, treatment may help reduce symptoms.

Klinefelter syndrome is diagnosed using a number of tests, including:

There is no evidence that the Klinefelter chromosomal abnormality will be reproduced within the same genetic family, nor is there any evidence that a Klinefelter male is predisposed to being homosexual any more than the normal 46,XY male (Bock, 1993; Visootsak & Graham, 2006).Nonetheless, in subsequent pregnancies, it is recommended that prenatal diagnosis be offered to couples who have had offspring with Klinefelter syndrome. 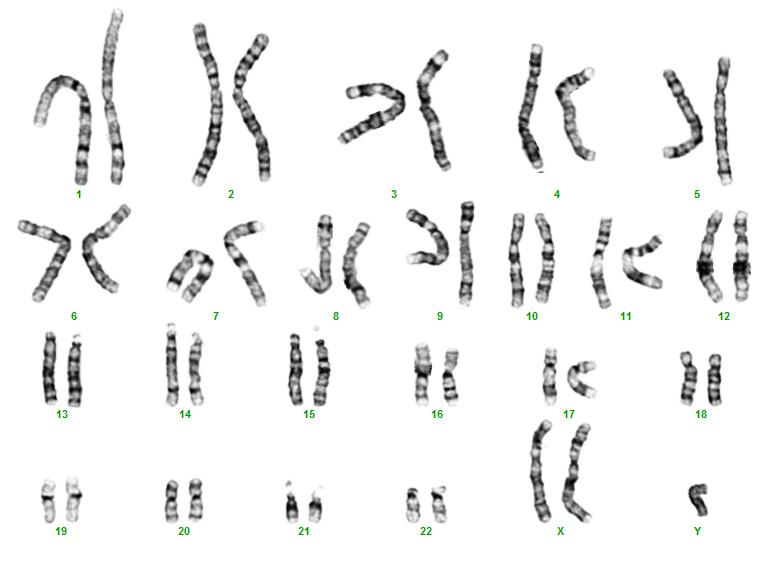 There is no cure for Klinefelter syndrome but typically Klinefelter males live a successful, normal life.

Treatment consists of testosterone replacement therapy which is recommended at onset of puberty. This will not treat infertility, hypogonadism or gynecomastia but instead, will help promote the proper body proportions, muscle size and other secondary sex characteristics such as body and facial hair. Treatment for infertility would lie with the medical assisted programs that focus on sperm extraction and intracytoplasmic sperm injection.

Steps To Accelerate Preparation Of Medical Reports At MOH Hospitals