Inguinal hernia, , is a condition in which the bowel or the omentum had fallen into a bag (pouch), and it protrudes as a sac through an opening in the abdominal wall muscle and bulges out through the groin area.

This condition is primarily caused by the opening in the muscle wall of the abdomen that will naturally close when the baby is born or within the first year of life of the infant.

It is different in adults where the cause is due to the weakness of the abdominal wall muscles which occurs with increasing age and onset of other health problems.

Inguinal hernia is NOT caused by the eating practices of pregnant women. It cannot be detected when the baby is in the womb.

Overall, the rate of inguinal hernia in children is 3 %; mostly involving boys (6-10 times more than females).

Inguinal hernia is a condition where, particularly among infants under 1year of age, can lead to complications caused by bowel trapped in the hernia sac (see the section on ‘complications’). This rate is expected to be in the range of 30 %.

Inguinal hernias may involve one or both the sides of the abdomen. It will look like a swelling under the skin of the abdomen at the groin, or it can descend into the testicles of boys (Figure 1).

It is NOT caused by vigorous activity or pressure as when an infant cries, but it will be seen to be more pronounced during those instances. 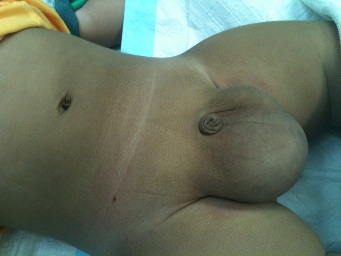 If part of the bowel is trapped in the hernia sac (incarceration), a major complication that can occur is intestinal obstruction. In this situation, stool and gas cannot get out through the anus as usual; this causes patients to experience pain in the stomach, abdomen or testicles, bloating, vomiting and difficulty in passing stools (Figure 2). 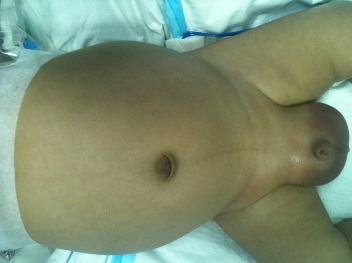 This condition requires immediate or emergency surgical treatment. Another complication is testicular atrophy which can happen especially in premature babies or if the hernia is associated with undescended testicles as in male babies.
If the patient is not treated early, bowel trapped in the hernia sac can become gangrenous due to the restricted blood flow through the blood vessels trapped in that part of the intestine.

There is no other treatment for inguinal hernia problem other than surgery. This surgery is known as herniotomy.

It is a procedure that requires general anaesthesia and preferably performed by paediatric surgeons. Patients should be made to fast for several hours before surgery.

In a situation that does not involve complications, surgery is usually done as a day-care procedure which does not require hospitalisation overnight.

Herniotomy involves making a small incision (usually 2 – 3cm) in the area with the problem.
The sac is usually found under a layer of muscle. This sac is separated from the spermatic cord and blood vessels. It is then cut and tied so that it does not allow the movement of bowel or its lining into it. The cut ends under the skin are then stitched with a special thread that will disappear on its own over time. The procedure usually takes 15-30 minutes.

After surgery, the patient may be allowed to eat and drink when he regains consciousness. The patient will be allowed to go home the same day. Parents will be instructed to remove the dressing from the wound two days after surgery.
If the wound does not heal (i.e. red or purulent), the patient should be brought back to see the doctor. Typically, older children are advised not to engage in vigorous physical activity for at least 1-2 months.

Babies, born preterm or prematurely, have a high incidence of inguinal hernia (up to 30%). As mentioned, these babies have a higher risk for complications described. Therefore, surgery for the baby is usually done before the baby is discharged from the Special Care Nursery (SCN) when the weight of the baby is between 1.6 – 1.8 kg.