Many conditions can impact the position of the eyelid relative to the eyeball. These malpositions can cause reduced vision as the eyelid may block vision or it may cause irritates the eye surface due to increased exposure and dryness.

There are four basic eyelid malpositions:

Entropion is an inversion of the eyelid. It will cause eyelashes to rub against the surface of the eye (cornea and conjunctiva). This frequently causes an irritation and redness to the eye and usually needs treatment, either medical or surgical intervention.

There are four main types of ectropion:

The symptoms of the entropion include tearing, eye irritation, eye redness and discharge. Eye examination shows inturning of the eyelid, lashes rubbing the cornea, congestion of the conjunctiva and erosion of the cornea due to constant rubbing of the lashes on the cornea.

Entropion treatment can be divided into medical (temporary) and surgical (permanent). Medical treatment is frequent lubrication of the eye to reduce the eye irritation. The surgical treatment is determined by the type and severity of entropion.

Ectropion is an outward turning of the eyelid. With aging, the eyelid becomes very lax and this can cause the eyelid to sag and turn outward. The dryness of the eye surface is irritating and can cause chronic red eyes. Ectropion commonly occurs in lower eyelid. This condition usually needs treatment, either medical or surgical treatment.

There are four main types of entropion:

The symptoms of the ectropion include tearing, eye irritation, eye redness and discharge. Eye examination shows outward turning of the eyelid, congestion of the conjunctiva, erosion of the cornea caused by incomplete blinking to close the eyelids.

Eyelid retraction is present when the upper eyelid is displaced superiorly or the lower eyelid inferiorly, exposing the sclera between the limbus and the eyelid margin. Lower eyelid retraction may also be a normal variant in patients with shallow orbits or certain genetic orbital or eyelid characteristics.

Eyelid retraction occurs when the muscle is overactive or inflammation and scarring causing it to tighten and pull the eyelid thus it will open more than normal. This frequently causes a surprised appearance and irritation of the eye surface because of dryness. It is frequently seen in patients with thyroid eye disease.

Other causes of eyelid retraction include post cosmetic surgery of the eyelid (such as lower eyelid blepharoplasty), eye muscle problem or a central nervous system lesion.

Eyelid retraction can be corrected surgically by several lengthening techniques. 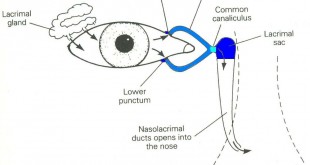