Effects Of Hormones On Fertility

Infertility among couples can be due to many factors involving either or both partners. Among the factors are hormonal components which can directly or indirectly have an effect on the cause of the infertility. Hormones are secretions produced by glands and have an effect on target organs which are a distance from its site of production. The hormones are mainly transported by the blood stream to its target organs. Basically the intact functioning of the hormones in the relationship between the hypothalamus, pituitary and the genital tract are essential for the normal production of the egg or sperm. If it is disrupted or altered by effect of other hormones then it can have a negative outcome.

The main hormones are gonadotropin releasing hormone (GnRH), follicule stimulating hormone (FSH), luteinizing hormone (LH), estrogen (female) and testosterone (male). GnRH is released by the hypothalamus and this stimulates the pituitary to produce FSH and LH. This is turn stimulates the ovary in the female and the testis in the male. There is usually a feedback mechanism which reduces or stops the production from the pituitary. 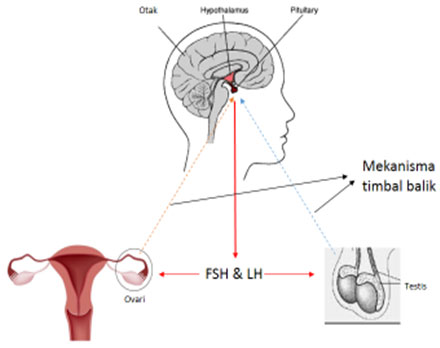 In the female, the ovary is stimulated to form follicles which will continue to grow till it achieves its maturity size. This is a cyclical process that happens over one month. While doing so it will produce estrogen in increasing amount and this will have an effect on the womb lining. In the mid cycle there is a surge of LH production from the pituitary gland which will trigger ovulation. Subsequent to that there will be a gradual increment in progesterone production by the ovary. This is important for the womb lining which will gradually thicken by the effect of progestogen to undergo changes and increased blood supply to be ready for implantation of the embryo.

In the male the FSH stimulates sperm production and certain functions in the testis while LH stimulates the testis to produce testosterone. This is usually a continuous process.

Role of hormones in infertility

The usual hormonal problem in the female patient is due to inadequate or abnormal response in the ovary as in polycystic ovarian syndrome. The polycystic ovarian syndrome is characterised by excessive weight gain, excessive facial or body hair and irregular menstrual cycles. This results in abnormal production of estrogen and failure to have the LH surge for ovulation, thus there is inadequate progesterone production. Therefore failure to ovulate results in infertility and irregular menstrual cycles.

While in the male partner the hormonal abnormality is usually as a result of damage to the testis and thus not responding to the stimulation from the pituitary.

Sometimes other hormones can also have negative influence on the gametes. The commonest are raised prolactin hormone and abnormal thyroid hormone levels. These disrupt the normal hormonal axis resulting in anovulation or reduced sperm formation.

Hormone levels can also be affected by everyday events such as stress, changes in lifestyle like weight loss and gain and workplace or home events. This ovulation and as a consequence fertility can be affected.

Liow: Dengue deaths down by 80% this year