Teenage pregnancy refers to pregnancy of a young woman aged between 10 and 19 years. In addition to the problems and complications faced during any pregnancy, there are many consequences of becoming pregnant as a teen which includes mental problems, social and financial problems and also risk of death.

When teen pregnancy occurs, the entire family will be affected which lead to stress that will affect family relationships. The first predicament faced by the teen and her family is whether or not to continue with the pregnancy and have the baby. The teenager usually feel that she is not ready to take care of the baby and opted for abortion or may give it up for adoption. The problems will get worse if it involve legal issue which may add to the pressure and stress that the teen and the family encountered.

Pregnant adolescent are at higher risk to get mental health problems such as depression, intense stress and pressure to become parents. They are faced with a lack of support from family and community that will lead to depression, making wrong decisions and abusing drugs.

Because of the stigma of teenage pregnancy is still high in our community, pregnant teen may deal with feelings of shame, guilt, anger, denial and may lead to depression and low self-esteem. Eventually they will be afraid to seek help from friends, family or anyone about becoming pregnant which lead to further isolation from society.

Effects of induce abortion/termination of pregnancy

A pregnancy that result in induced abortion can result in long-term psychological effects on adolescent which include depression, post-traumatic stress disorder, guilt feelings, sleep problems and anxiety disorders.

Stigma attached to teen pregnancy out of wedlock will make adolescent feel isolated and do not get much support from family and friends.

The effect of teen pregnancy to the baby:

The effect of pregnancy to the teenager:

Due to stigma and shame pregnant teenager are often forced to stop schooling and this will reduces their chance to hold a decent job and have  a good income which will limits the opportunities to build a better life in the future. Poor income may have adverse consequences to the nutrition and care of the baby to be born.

Pregnant teens are at higher risk of living in poverty, unable to maintain a stable job, ending up in abusive home, having children who have low grades in school and having daughters with a higher risk of becoming pregnant during teenage years. This fact is derived from studies conducted by the American Academy of Child and Adolescent Psychiatry.

Every teenager needs to know the effects and consequences of risk behaviors that will lead to teenage pregnancy. Pregnant teenager may encounter many problems as discussed above which will affect family relationships and society.

Where to seek help

Teenager who are pregnant should seek help from trusted adult or care provider such as:

Teenager can also get help from hotline such as: 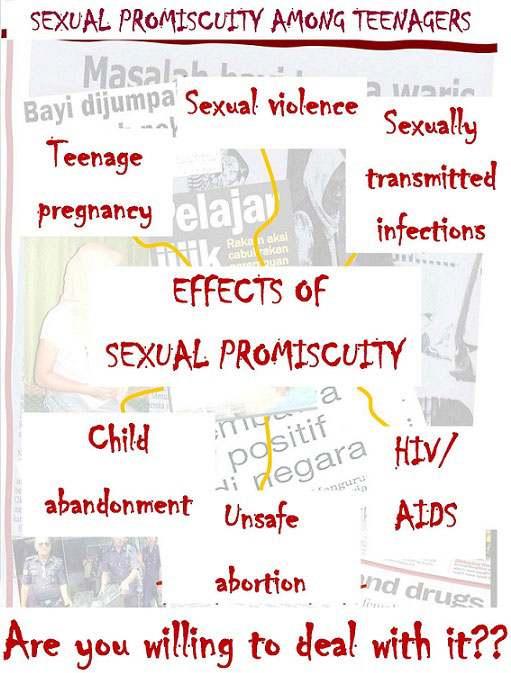