What Is An Ectopic Pregnancy?

Ectopic pregnancy is derived from the Greek word ‘ektopas’ which means ‘out of place’. It is a pregnancy that implants outside the uterine cavity or womb. It occurs in 1% to 2% of all pregnancies and of these about 98% implants in the fallopian tube (figure 1). Other sites for ectopic pregnancy include abdominal cavity, ovaries, cornu of the uterus and cervix. 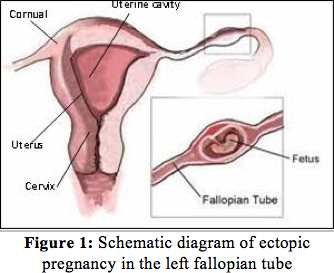 Who are at risk?

We don’t always know why women have ectopic pregnancies but there are certain factors that increases their risk and include :

Why is it dangerous?

In most ectopic pregnancy, the embryo does not reach the uterine cavity or womb, but instead it implants into the lining of the fallopian tube. The implanted embryo then burrows into the tubal lining and this will cause bleeding. As the embryo increases in size, the fallopian tube is stretched and it may rupture. This may cause very heavy bleeding into the abdominal cavity and threaten the life of the woman. Early diagnosis and treatment in a hospital is necessary.

What are the signs & symptoms?

Failure to diagnose the ectopic pregnancy early may cause the rupture of the fallopian tube, resulting in excessive bleeding. At this stage you may have the following symptoms :

If you have the above signs and symptoms then you should get to the Accident & Emergency Department of the nearest hospital as soon as possible for treatment. Either you call for an ambulance or someone should drive you there. 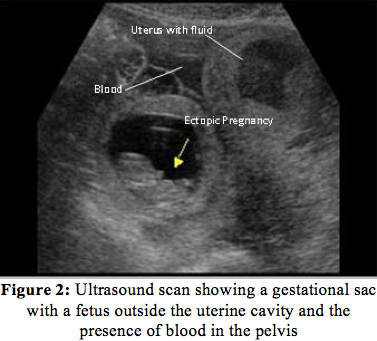 How to diagnose an ectopic pregnancy? Diagnosing an ectopic pregnancy is not easy. It may require a few days particularly if you have very few symptoms. The doctor will initially confirm if you are pregnant by performing a urine pregnancy test (UPT). Then an abdominal and vaginal examination would be carried out.

Blood tests to check serum beta-hCG levels may be ordered by the doctor in certain circumstances and usually needs to be repeated 2 days later. This may be able to assist the doctor in assessing the pregnancy and if a pregnancy is an ectopic or not.

The above examinations and investigations may not be able to confirm an ectopic pregnancy and you may have to undergo a laparoscopic or an open surgery to visually confirm it. Sometimes when a tubal abortion (when the gestational sac is expulsed from the fallopian tube into the abdominal cavity) has occurred, it is difficult to find the pregnancy tissue. A laparoscopy in very early ectopic pregnancy occasionally shows a normal looking fallopian tube.

What are the possible treatments?

The treatment for ectopic pregnancy depends on the clinical presentation. This may include: if the ectopic has ruptured or not, whether you are clinically stable (normal blood pressure and pulse rate), the size of the ectopic gestational sac, and the presence of blood in the pelvis and the level of serum beta-hCG. How far away you live from the nearest hospital may be one of the factors that the doctor will consider before deciding which treatment is the right one for you.

There are several ways ectopic pregnancy can be treated :

Will I be able to get pregnant again?

There is still a good chance that you would be able to get pregnant in the future, but this would be depend on how healthy the other tube was and several other factors such as: your age, and/or if you had difficulty getting pregnant before. If the other tube is not blocked or damaged then the chances of getting pregnant is good irrespective whether the tube affected by ectopic was left intact or completely removed during the surgery.

In general, some 65% to 70% of women with a previous history of ectopic pregnancy will conceive again within 18 months. However, if both the fallopian tubes are damaged or ruptured then you may have to undergo infertility treatment (IVF) to be able to conceive in the future.

What are my chances of getting another ectopic pregnancy?

The chances of getting another ectopic pregnancy are between 12% to 20% depending on several factors. Your doctor would be able to inform you of your risks.

What should I do when I get pregnant again?

Once you suspect you are pregnant, please confirm the pregnancy by doing a urine pregnancy test or by going to your doctor early. An early assessment by ultrasound should be able to confirm if it is a normal pregnancy or another ectopic pregnancy.

How long should I wait before trying to get pregnant again?

This is dependent on when you feel you are physically and emotionally ready to try for another pregnancy. The general advice is to wait for 3 to 6 months to recover from the surgery, 3 months if it is by laparoscope and 6 months if it is by open surgery.