What is a drug mule?

A “drug mule” is a person who transports or smuggles drugs on their body or in their luggage across international borders.

Why does a person want to be a drug mule?

How does a drug mule work?

The modus operandi of international drug syndicates have changed in the recent years. Now they deploy Malaysians especially young women as drug mules.

Mules smuggle drugs strapped to their bodies or in luggage, shoe soles, shampoo bottles and any other way they can think of to conceal illegal drugs to beat the security system. Sometimes the goods are hidden in the bag or vehicle of an innocent person who does not even know they are carrying drugs.

Other methods involves wrapping the drugs in condoms or latex gloves which can be stored in vagina, rectum and even swallowed to keep it in the stomach and recovering them from the feces later.

Drug mules are usually in their twenties or thirties but even elderly have been caught smuggling drugs.

There is no specific “look” for drug mules. Currently the authorities are checking everyone. The majority of drug mules are male but the number of female drug mules are on the rise.

How the drug mule can get caught?

Customs officials are suspicious of:

X-rays, urine tests and sniffer dogs are used to detect presence of drugs in immigration and custom check points

What are the consequences of being a drug mule?

Drug smuggling is a serious offence in Malaysia and in most countries worldwide and carries either a mandatory death penalty or lengthy jail sentence.

The biggest danger is the when drugs in latex gloves or condoms rupture in the stomach. This can lead to massive drug overdose and can be fatal.

Step to avoid being the victim of a drug syndicate: 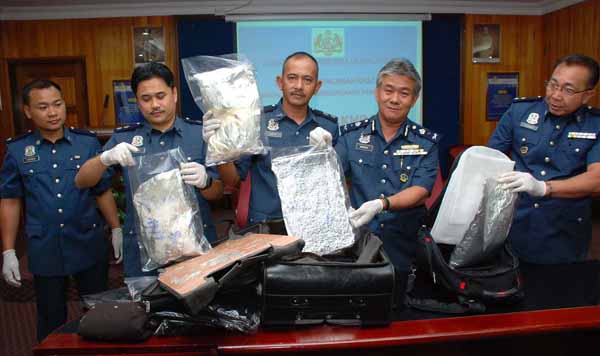 BUSTED: Hamza (second right) and other Customs officers showing the four plastic packets of drugs that were smuggled into the country. ( http://www.theborneopost.com/2011/09/15/foreign-student-could-face-death-for-drugs/#ixzz3IAFCF7C4) 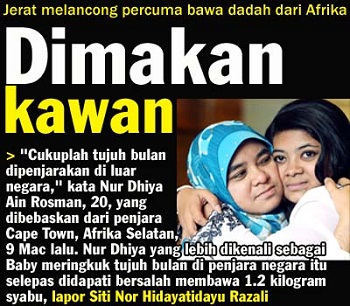