In children, dental anomalies or defects are very common. Parents can be easily perturbed if they see missing or funny looking teeth in their children’s mouth when instead they are expected to have normal sets of teeth. Early and accurate diagnosis of dental hard tissue anomalies is important as the child’s growth and development as well as treatment outcome can be affected. Dental defects, or anomalies, are a result from some incident or disease, which occurred during one or more stages of tooth development. This article will present some of the conditions which occur exclusively or more commonly in children.

Abnormalities in Quantity of Teeth

The eruption of the first teeth is met with great interest by the parents. Sometimes, the expectations are met with curiosity and concern when teeth appear early in the mouth. Premature eruption of primary teeth is relatively uncommon as approximately one in 2000-3000 live births is affected. Due to its rare occurrence, some culture to this day still associate tooth that erupts during birth with superstitious beliefs and folklore, being related to good or bad omen. Hence, some parents have mixed feeling of retaining the newly erupted tooth.

What are natal and neonatal teeth?

What caused natal and neonatal teeth?

Natal and neonatal teeth are generally considered as part of the normal deciduous teeth. Hence it is not surprising that there will be no replacement if they are removed until the permanent teeth erupt at the age of 6-7 years.

The actual cause of natal and neonatal teeth eruption is still unknown. It has been suggested that the condition is due to an abnormal positioning of the tooth bud during foetal life. It also has been related to infection or malnutrition, prolonged fever, hormonal stimulation, and genetic transmission.

Natal and neonatal teeth may have a normal size and shape as the natural baby teeth or it may be conically shaped and opaque yellow-brownish in colour. Inflammation of the gums surrounding these teeth is often due to their mobility as shown in Figure 2. 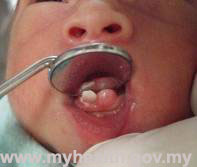 Extremely loose natal or neonatal teeth may be a danger to the airway if they are dislodged and inhaled. They can cause inconveniences during suckling and interfere with breast feeding, causing traumatic injury to the infant’s tongue and/or the mother’s breast.

If the tooth is markedly loose and it poses a threat of inhalation then its removal is generally recommended. If the tooth is firmly implanted it can be left in the mouth.

Hypodontia is a term given to define congenital missing of one or more teeth, whereas anodontia refers to a complete absence of teeth either on one or both jaws. Missing primary or permanent teeth are quite common. It has long term implication as it affects the child’s appearance and self-esteem. It also affects the child’s ability to function in speech and mastication. It happens in 3-6% of the population as reported in several studies. Lateral incisors, second premolars and the wisdom teeth, or third molars, are the most common teeth absent. Treatment Treatment for missing teeth depends on their location in the mouth and the age of the child. It usually involved replacement of missing teeth with removable or fixed appliances such as dentures, crowns and bridges or implant. Orthodontic treatment may be necessary to aid in the placement of crowns and bridges.

Supernumerary teeth are extra teeth that appear in addition to the regular number of teeth. This is due to disturbance during the early tooth development. It can occur between the maxillary central incisors (mesiodens) with a malformed, peg or conically-shaped tooth or other parts of the jaw.

Supernumerary teeth cause disturbances in the normal tooth eruption process.  If left in the mouth it can also cause root resorption of adjacent teeth or undergo cystic changes.

Abnormalities of Size or Shape of Teeth

Abnormal teeth can also appear in different shapes or sizes. They are categorized according to their appearance.

Dens evaginatus is a rare dental anomaly involving an extra cusp or tubercle that protrudes from the tooth surface. When it appears on the back surface of the front teeth it is commonly known as Talon’s cusp (Figure 3). It can also presents as an accessory cusp projecting from the chewing surface of the back teeth, usually the premolars. In this case it is referred to as Leong’s premolar (Figure 4). The anomalous tooth structure is composed of normal enamel and dentine with varying extensions of pulp tissue. The problem arises when the extra tubercle fractured through mastication, exposing the pulp region of the tooth. This can easily leads to infection and rendering the tooth becoming non-vital.

Treatment This condition requires urgent attention. One is advised to seek dental treatment before the accessory cusp fractured in order to prevent further complication.  The dentist is able to provide preventive treatment.

A talon cusp is an extra cusp that resembles an eagle’s talon (claw). It appears as a projection from the cingulum of incisor teeth and rarely found in primary teeth. Large talon cusps can interfere with occlusion.

Dens invaginatus is characterized by an infolding of enamel and dentine that appears like a groove or fissure. It is most commonly found in permanent upper lateral incisors. The thin enamel couple with the inaccessibility to cleansing the anomalous surface makes it prone to decay.

As with Dens evaginatus, early detection is crucial so that preventive treatment can be performed. The dentist would normally sealed the groove and fissure with sealants.

Fusion is where two developing teeth merge into one tooth. As shown in Figure 5, the phenomenon of tooth fusion arises through union of two normally separated teeth, and depending upon the stage of development of the teeth at the time of union, it may be either complete or incomplete fusion. Fusion is prevalent in primary dentition, with incisors being more affected. These teeth cannot be flossed.

There is a groove that runs down the back of the tooth that is prone to decay and may necessitate a filling. It can present a problem as the permanent teeth can become unsightly. Depending on the severity of the fusion, the dentist will be able to mask the defect to make it aesthetically acceptable.

Gemination is where a developing tooth splits into two separate teeth as compared to fusion. In geminated teeth, division is usually incomplete and results in a large tooth crown that has a single root and a single canal.( Figure 6) Gemination is more prevalent in primary dentition, with incisors being more affected.

This anomaly is managed similarly to Fusion depending on the severity of the defects. 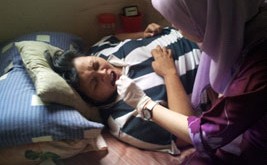