Cardiac biomarkers are substances that are released by the heart into the blood as a result of myocardial injury, where the heart is damaged or stressed. Measurements of these cardiac biomarkers are used to help diagnose acute coronary syndrome (ACS) and cardiac ischemia, conditions associated with insufficient blood flow to the heart. Besides these, cardiac biomarkers also be used to help monitor and manage individual with suspected ACS and cardiac ischemia. It is important to distinguish heart attacks from angina, heart failure or other conditions such as non-heart-related condition that may have similar signs and symptoms because the treatments and monitoring requirements are different.

The root causes of both ACS and cardiac ischemia are usually the build up of plague in artery walls and hardening of the arteries (atherosclerosis). This can result in severe narrowing of the arteries to the heart or a sudden blockage of blood flow through these coronary arteries. When blood flow to the heart is blocked or significantly reduced for a longer period of time (usually for more than 30-60 minutes), it can cause heart cells to die and is called an acute myocardial infarction (AMI or heart attack). This leads to death of the affected portion of heart muscle with permanent damage and scarring of the heart and sometimes can cause sudden death by causing irregular heart contractions (arrhythmia). Unstable angina and AMI are together called ACS since they are both due to a very acute decrease in blood flow to the heart.

Annually, several million patients seek care in the emergency department because of chest pain or other symptoms suggesting an ACS, but only about 10% are subsequently confirmed to have AMI. The criteria for the diagnosis of myocardial infarction (MI) have been redefined recently, as reported in a consensus document of the European Society of Cardiology (ESC) and the American College of Cardiology (ACC) and require at least 2 of the 3 following characteristics: (1) typical symptoms; (2) characteristic rise and fall pattern of a cardiac biomarkers (eg, MB isoenzymes of creatine kinase) or, preferably, serum Troponin (T or I); or (3) a typical electrocardiogram (ECG) pattern involving the development of Q waves.

Cardiac markers tests that may be used to help to diagnose, evaluate and monitor individuals suspected of having ACS include Creatine kinase (CK and CK-MB, Troponin (I or T), Myoglobin, hsCRP, BNP etc. In lab testing, venous blood sample is drawn and run using chemistry analyser.

Creatine Kinase (CK) is an enzyme found in higher concentrations in the heart and skeletal muscles and in much smaller concentrations in brain tissue. Because CK exists in relatively few organs, this test is used as a specific index of injury to myocardium and muscle. CK can be divided into three isoenzymes: MM, BB and MB. Skeletal muscle contains primarily MM; cardiac muscle contains primarily MM and MB; and brain tissue, GI system and genitourinary tract contain primarily BB. Total levels may be normal in AMI, even when the CKMB is elevated. In general, total CK initial rise 2-6 hours after onset of damage, peaks at 18-36 hours and returns to baseline after 3-6 days.

CKMB (found mainly in the heart) is normally absent in the serum but becomes present and increases in a specific pattern when released from damaged myocardial cells. Thus elevation of CKMB, the cardiac isoenzyme, provides a more definitive indication of myocardial cell damage than total CK alone. Following myocardial injury, the initial CKMB rise occurs 4 to 9 hours after the onset of chest pain, peaks at 24 hours and returns to baseline at 48 to 72 hours. One advantage of CKMB over markers that remain elevated for longer periods is that it is easier to detect reinfarction using serial CKMB measurement.

However, there are some interfering factors that will contribute to a false result interpretation. Elevated CK levels may be found in conditions of strenuous exercise, weight lifting, surgical procedures that damage skeletal muscle, alcohol and other drugs of abuse, childbirth and hemolysis of blood samples. Besides this, athletes have a higher CK value because of greater muscle mass.

Results are method dependent and should be compared with the reference values of the laboratory performing the test.

Cardiac troponin is unique to the heart muscle and is highly concentrated in cardiomyocytes. Troponin T and I are two isoforms that leak into the bloodstream during myocardial necrosis. These isoforms show a high degree of cardiac specific. Because of the low-to-undetectable values in the serum of healthy people and the quick elevation (detectable within 1 hour after myocardial cell injury), these ultrasensitive markers have been praised for their usefulness in the early diagnosis of acute myocardial infarction (MI). Both tests show similar accuracy in identifying acute MI. Cardiac troponin levels return to normal within 5 to 7 days. Their greatest use is to exclude cardiac damage in patients with chest pain and myocardial infarction is highly unlikely if there is no increase in troponins.

Troponin I remain increased longer than CKMB and is more cardiac specific. Troponin T is more sensitive but less specific, being positive with angina at rest. However, there are some interfering factors that will contribute to a false result interpretation. Cardiac Troponin T levels may be increased in chronic muscle or renal disease and trauma but not affected by orthopedic or lung surgery.

Table 2: Reference range of Cardiac Troponin. Adapted from Chernecky, C. and Berger, B. (2008)

Myoglobin is the oxygen-binding protein of striated muscle or cardiac muscle. It functions as short-term oxygen storage, carrying the muscle from one contraction to the next. It is released into the interstitial fluid with elevated serum levels detected as early as 30-60 minutes after a MI or damage to any muscle tissue. Thus, serum myoglobin is found earlier than CK or CKMB in AMI. Although myoglobin may be useful for a rapid diagnosis of ACS, as the levels become elevated very early in the time course of an MI, but because of the presence of myoglobin in skeletal muscle the test has poor specificity for ACS.

However, there are some interfering factors that will contribute to a false result interpretation. Serum myoglobin levels may be elevated by the use of cocaine and the decreased elimination of serum myoglobin due to kidney insufficiency. Besides that, normal levels of serum myoglobin may be higher in men compared to women but increase in both sexes with age.

Table 3: Reference range of Serum Myoglobin. Adapted from Chernecky, C. and Berger, B. (2008)

During any inflammatory process, a specific abnormal protein named C-reactive protein (CRP) appears in the blood. This protein is virtually absent from the blood serum of health persons. CRP is one of the most sensitive acute-phase reactants. Levels of CRP can increase dramatically (100-fold or more) after severe trauma, bacterial infection, inflammation, surgery or neoplastic proliferation. Measurement of CRP has been used historically to assess activity of inflammatory disease, to detect infections after surgery, to detect transplant rejection and to monitor these inflammatory processes.

There are two types of CRP assays. One measures a wide range of CRP levels to include those found in patients with acute infections. The reportable range is typically 0.3 to 20 mg/dl. The second is a high-sensitivity CRP (hs-CRP) assay. The latter can detect a lower level of CRP to include those that may be of value in measuring the risk for a cardiac event. The sensitivity is to 0.01 mg/dl. The hs-CRP is useful, therefore, for assessment of risk for developing MI in patients presenting with ACS. However, CRP and hs-CRP should not be done when the individual has chronic inflammatory conditions such as arthritis.

Natriuretic peptides are substances produced by the body that function in regulation of fluid balance through feedback mechanisms from and to the renin-angiotensin-aldosterone system. Brain or B-type natriuretic peptide (BNP) is released by cardiac cells in the ventricles of the heart. BNP are secreted in response to the stimulation of the heart’s volume receptors by the stretch from increased blood volume. Thus, BNP is a marker of ventricular systolic and diastolic dysfunction. This test is useful in diagnosing congestive heart failure and normal plasma level excludes heart failure.

Besides that, AMI also may be associated with activation of neuro-hormones. The plasma BNP level has been shown to correlate with long-term cardiovascular mortality in patients with AMI and is an independent predictor of left ventricular ejection fraction and heart failure in these patients. The BNP level correlates with the amount of ventricular dysfunction present after AMI and may, in future, prove to be a useful screening test to identify patients at highest risk for morbidity and mortality.

However, there are some interfering factors that will contribute to a false result interpretation. Results are invalidated if the sample is haemolysed or is not kept on ice until it is spun and frozen. Females more than 75 years have a greater prevalence of false-positive results. 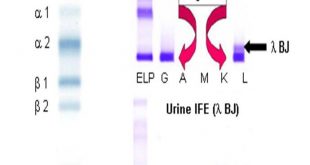