An objective method to diagnose asthma

Asthma is a chronic respiratory disease characterized by airway inflammation, hyper-responsiveness and narrowing.

The aim of asthma treatment is to treat the two key components of asthma, i.e. airway inflammation and airway narrowing. Progress in science and medical technology has seen the evolution of asthma treatment leading to better drugs. Although asthma cannot be cured at the present time, many drugs are available to treat and control asthma in the form of inhalers, tablets and injection depending on the severity of asthma.

The cardinal symptoms of asthma i.e. shortness of breath, nocturnal cough, wheezing and chest tightness are not always present in all asthma patients. Sometimes, clinical examination alone fails to detect signs and symptoms of asthma. Therefore, diagnosing asthma can be difficult without the patient undergoing certain tests.

Asthma may be diagnosed by taking a good clinical history from the patient and performing a simple lung function test (spirometry). The lung function test is measured by a portable device called spirometer. A spirometer measures forced expiratory volume in one second (FEV1). The patient will be given a bronchodilator drug delivered directly to his lungs after which the FEV1 will be measured again. This test is called ‘reversibility testing’ and it is aimed at looking for an improvement in FEV1 after bronchodilator. This method is able to diagnose asthma in most cases but may still miss the diagnosis of ‘cough-variant asthma’. Furthermore, the reversibility testing may not be able to detect a significant improvement in FEV1 (after bronchodilator) if the baseline FEV1 is normal. 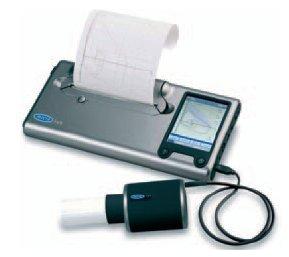 What is Bronchial Provocation Test (BPT)?

How is BPT performed?

BPT is not performed in the following situations:

Certain drugs, foods and beverages need to be avoided for a certain period of time prior to BPT including:

Other factors that may affect BPT results include smoking, exercise and allergens. Certain drugs need to be stopped for several hours or weeks prior to BPT. This will be explained by the doctor.

What happens during BPT?

Prior to BPT, the patient’s baseline FEV1 will be measured using a spirometer. There are several agents used in BPT including histamine, mannitol and methacholine. The agent usually used in Malaysia is methacholine. 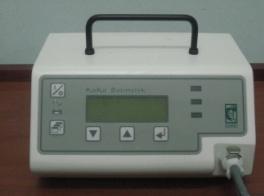 BPT is considered positive if there is a fall in FEV1 by at least 20% from the baseline FEV1.

If the test is positive, the patient is confirmed to have asthma and bronchodilator will be prescribed to the patient after the test to ensure the FEV1 returns to normal before the patient is allowed to go home. Potential side-effects of BPT include shortness of breath, cough and chest tightness.

Overall, BPT is a very safe procedure in experienced and trained hands. The airway narrowing due to the test can be quickly reversed by bronchodilator.

Where is BPT performed?

BPT is usually performed in a lung function laboratory under the care of a respiratory physician (lung specialist).

In conclusion, BPT is a very useful and objective method to diagnose or rule out asthma. BPT has an important role in the assessment of patients who have persistent cough and shortness of breath.

1. Assistant Medical Officer (AMO) will explain the test to the patient including drugs, foods and beverages that need to be avoided or stopped prior to the test. An appointment for the test will be given once the patient fully understands the explanation. 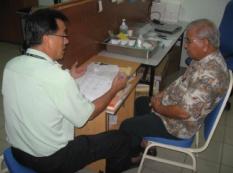 2. On the day of the test, AMO will prepare methacholine concentrations (from the lowest to the highest) 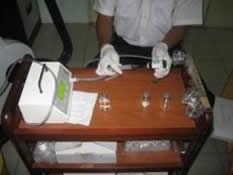 3. Patient will inhale aerosolized methacholine delivered via a dosimeter. Methacholine concentration will be increased gradually. 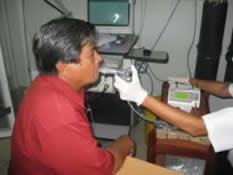 4. Patient’s FEV1 will be measured using a spirometer at regular intervals after inhalation of methacholine. The test will be stopped if FEV1 falls by 20% of baseline FEV1 prior to the test. 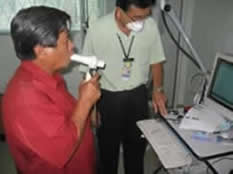 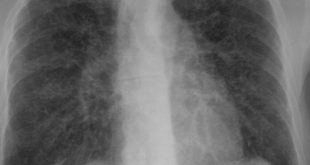