Anticholesterol is a group of medicine used to reduce high cholesterol levels in the blood. Cholesterol is produced by the liver from fats in our diet. Cholesterol doesn’t dissolve in the blood instead, it bonds to carriers called lipoproteins which transport it between cells. Certain amount of cholesterol is needed by our body for the formation of cell membranes, production of some hormones and vitamin D.

Anticholesterol drug acts through different functions according to its type, in lowering the blood cholesterol level.

The types of anticholesterol drug:

Bile acid binding resin acts by binding to the bile acid which resulted in reduced amount of this acid for digestion process. The reduction of bile acid will promote more production of this acid by the liver. Since the liver uses cholesterol to produce bile acid, this process will help in lowering the excessive cholesterol level in the blood.

Fibric Acid Derivatives is used for the treatment of high triglyceride level in the blood. Fibric acid derivatives will reduce the production of Very Low-density lipoproteins (VLDL) and speeds up the removal of triglyceride from our body.

Combinations of anticholesterol are also available in current treatment. These combination treatments proved useful in patients who failed to achieve optimal blood cholesterol level despite being compliant to initial anticholesterol medication.

Formulation of anticholesterol drug available in the market.

How to take the medication and side effect

Patient might experience several common side effects from statin such as headache, nausea, constipation, itchiness/rashes and tiredness which usually go away after the body had adjusted. Muscle problems and liver abnormalities are rare, but may need regular liver function monitoring.

Major side effect of bile acid binding resin is constipation. This side effect can be reduced by increasing fluid intake. Several other side effects that can occur are nausea, bloating / flatulence and indigestion. Since this group of drug will interfere with the absorption of various medications, patient is advised to take this medication 1 hour before or 4 hours after taking other medications.

Among the usual side effect of Fibric acid derivatives are neuromuscular disturbance (headache, tiredness and vertigo), diarrhea, nausea, rashes and eczema. Patient is advised to take this anticholesterol drug with food to avoid gastrointestinal intolerance. Patient also needs to inform their doctor if they experience muscle or joint pain after starting treatment with this medication.

Statins, Gemfibrozil and Niacin can affect the liver normal function due to their action in the liver. Therefore, patient who is taking these anticholesterol drugs will be asked to do a scheduled laboratory test for liver function to ensure the liver is in good condition. If the result of the test showed abnormality in liver function, the doctor will do adjustment in the anticholesterol drug treatment.

While patient on drug therapy, patient also need to :

Over The Counter Medicine (OTC)

Can medications be crushed? 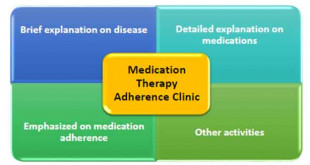