Purpose of having different Test

Since basic semen analysis is insufficient, it is appropriate to do advance semen analysis for diagnosis and evaluation for fertility treatment. Clinician usually needs more information if there are abnormalities in the semen such as low sperm vitality (less than 52% vital) (WHO, 2010), high number of round cells (more than 5 million) (WHO, 1992), and sperm Deoxyribonucleic acid (DNA) fragmentation test. These tests are frequently referred to as “advance semen test”. Different advance test serve for different abnormalities. Hypo osmotic swelling Test (HOST) is to test sperm vitality; Leucoscreen Test is to differentiate between round cells and white blood cells in semen and Sperm chromatin dispersion test (SCD) known as Halo test to analyse of the Deoxyribonucleic acid (DNA) quality in the sperm.

Diagnosis usually start with usual basic semen analysis and further test is done when there are abnormality in the semen sample such as low vitality (less than 58%), high concentration of round cells (more than 5 million/ml) or couple who continuously failed Intrauterine insemination (IUI) or In-vitro fertilization (IVF) with unexplained factor.

Most human ejaculates contain leucocytes (Aitken & West, 1990; Barrat et al., 1990; Wolff & Anderson, 1988), the predominant cell type being the neutrophil. Excessive presence of these cells (leucocytospermia/pyospermia) may indicate the existence of reproductive tract infection. Furthermore, leucocytospermia may be associated with defects in the semen profile, including reduction in the volume of the ejaculate, sperm concentration, and sperm motility, as well as loss of sperm function as a result of oxidative stress (Aitken & West, 1990; Aitken et al., 1989) and or secretion of cytotoxic cytokinesis (Hill et al., 1987). A normal ejaculate should not contain more than 5×106 round cells/ml, while the number of leucocyte should not exceed 1×106/ml (WHO, 1992). If the semen exceeds the parameters; microbiological test should be performed to investigate accessory gland infection. Leucocytes can be differentiating from round cells using mixture of two reagents, Reagent 1 and Reagent 2. Reagent 1 stained round cells to pink while leucocyte to brown (Figure1). 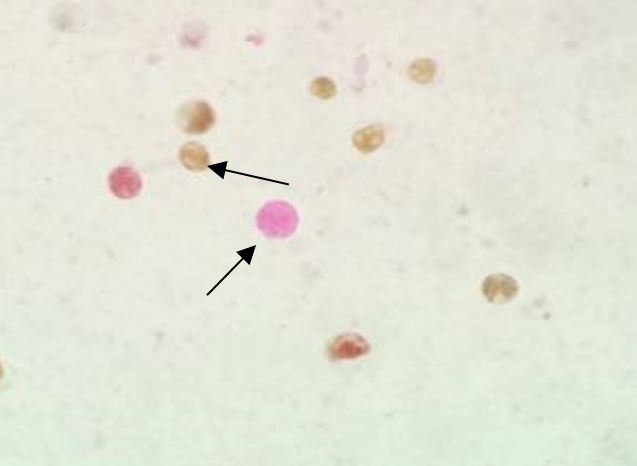 This test is based on the idea of semi-permeability of the intact cell membrane which causes spermatozoa to swell under hypo osmotic condition, when an influx of water results in an expansion of cell volume (Drevius & Eriksson, 1966) (Figure 2). This test was first introduced by Jeyendran et al., 1984. This test proves to be helpful in assessing the diagnosis and the management of male infertility since it is very important to know whether immotile spermatozoa are alive or death. A normal semen sample should have 58% or more alive sperm (WHO, 2010). The presence of a large proportion of vital but immotile cells may be indicative of structural defect in the flagellum. A high percentage of immotile and non viable cells (necrozoospermia) may be indicated problem of epididymal pathology. 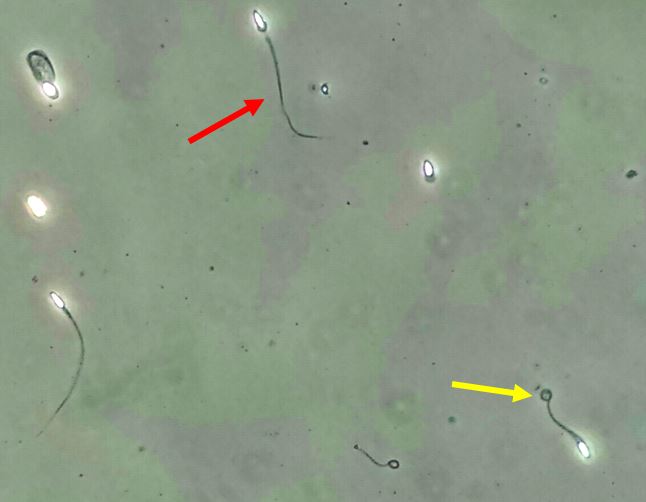 Measurement of sperm Deoxrionuleic acid (DNA) integrity has emerged as an additional measure of semen quality that may enable detection of occult male factors not identified on standard SA. Spano et al., 2000, showed that high Sperm DNA fragmentation (SDF) testing were inversely associated with the likelihood of unassisted conception among 215 couples with unknown fertility trying for the first time to conceive. The chance of natural conception was 1.7% per cycle in patients with SDF>40%, compared with 15% per cycle for patients with SDF<8. Bungum et al., 2007, examined SDF as a predictor of pregnancy with IUI and showed that the per cycle pregnancy and live delivery rates were 24% and 19% for patients with SDF<30%, compared with 3% and 1.5% for patients with SDF>30%. In addition to the apparent relationship between abnormal sperm DNA integrity and failure to conceive with unassisted conception and IUI, abnormal sperm DNA integrity is associated with a lower pregnancy rate after application of IVF or ICSI (Collins et al., 2008).In addition, high levels of sperm with abnormal DNA are associated with an approximately 2.5 fold increased risk of pregnancy loss during assisted reproduction. Sperm DNA integrity testing may be helpful for evaluation of couples with recurrent pregnancy loss or multiple failed attempts at assisted reproduction (Zini et al., 2008). 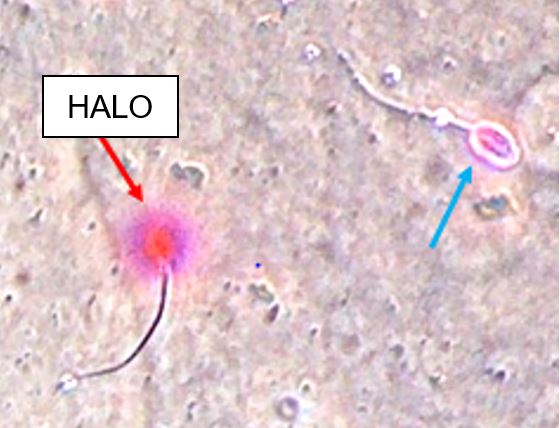 Who can benefit from the test

Advance semen analysis proves to be useful in treating sub fertile couples. Patient who give positive results from leucoscreen test will be prescribe antibiotics by clinician as part of the treatment to reduce white blood cells in the semen. Eliminating white blood cells from the semen can improve the function of the sperm and improve pregnancy rates. HOST test help for patient with no motile sperm (severe Asthenozoospermia) for ART (Assisted reproductive treatment). Sperm with positive HOST will be used for Intracytoplasmic sperm injection (ICSI) for oocyte fertilization. Abnormal sperm DNA integrity is associated with a lower pregnancy rate after application of IVF or ICSI. Therefore clinician will recommend a treatment to try to reduce the white blood cells, improve sperm motility and DNA fragmentation or may recommend a change to reproductive treatment plan.