A heart attack (myocardial infarction) is usually caused by a blood clot, which stops the blood flowing to a part of the heart muscle.

What causes a myocardial infarction (MI)?

The most common cause of a myocardial infarction (MI)  is a blood clot (thrombosis) that forms inside a coronary artery, or one of its branches. This blocks the blood flow to a part of the heart.

Blood clots do not usually form in normal arteries. However, a clot may form if there is some atheroma within the lining of the artery. Atheroma is like fatty patches or plaques that develop within the inside lining of arteries. Plaques of atheroma may gradually form over a number of years in one or more places in the coronary arteries. Each plaque has an outer firm shell with a soft inner fatty core.

What happens is that a crack develops in the outer shell of the atheroma plaque. This is called plaque rupture. This exposes the softer inner core of the plaque to blood. This can trigger the clotting mechanism in the blood to form a blood clot. (The diagram below shows four patches of atheroma as an example. However, atheroma may develop in any section of the coronary arteries.) 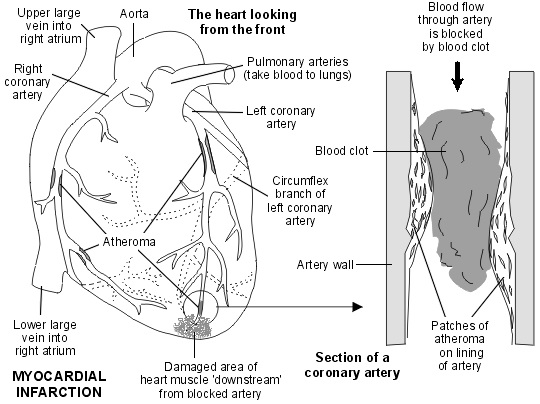 After an MI, if part of the heart muscle has died, it is replaced by scar tissue over the next few weeks.

Who is at risk of having a myocardial infarction / heart attack?

MI is common in people aged over 50 and it becomes more common with increasing age. Sometimes younger people are affected.MI is three times more common in young men than in young women. However, after the menopause, the female hormones no longer protect the heart so the risk is then the same for men and women. Certain risk factors increase the risk of more atheroma forming. The risk factors are :

What are the symptoms of a myocardial infarction?

The most common symptom is severe chest pain, which often feels like a heavy pressure feeling on the chest. Pain may travel up the jaw and down the left arm or down both arms. There may be shortness of breath, sweating , feeling sick or faint. The pain may be similar to angina, but it is usually more severe and lasts longer. (Angina usually goes off after a few minutes. MI pain usually lasts more than 15 minutes – sometimes several hours.)

However, some people have only a mild discomfort in their chest or feel like having indigestion or heartburn. Occasionally, an MI happens without causing any pain. Some people collapse and die suddenly. This is not very common.

What should I do if I think I am having a myocardial infarction?

Call for an ambulance immediately. Then, if you have some, take one aspirin tablet.

How is a myocardial infarction diagnosed and assessed?

Myocardial infarction diagnosed and assessed by :

What is the treatment for a myocardial infarction?

There are two treatments that can restore blood flow back through the blocked artery:

Both the above treatments usually work well to restore blood flow and greatly improve the outlook. The most crucial factor is the speed that one or other treatment is given after symptoms started. Other supportive therapy includes pain relief and oxygen.

The most crucial time after a heart attack is during the first day or so. If no complications arise, and you are well after a couple weeks, then you have a good chance of making a full recovery. A main objective then is to get back into normal life, and to minimise the risk of a further MI.

Before discharge from hospital, it is common for a doctor or nurse to advise you how to reduce any risk factors (see above). This advice aims to reduce your risk of a future MI as much as possible.

Before discharge from hospital, it is common for a doctor or nurse to advise you how to reduce any risk factors (see above). This advice aims to reduce your risk of a future MI as much as possible.

A Male With Female Voice 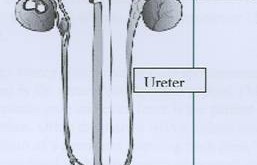