Bronchiolitis is an acute infectious disease of the lower respiratory tract that occurs primarily in the very young, most commonly infants between 2 and 6 months old. It is a clinical diagnosis based upon:

It is an annual and major cause of morbidity in infancy. Acute bronchiolitis is a very common and may cause serious respiratory illness in children.

It is usually due to a viral infection of the bronchioles. Respiratory syncytial virus (RSV) is the most common pathogen, found in 50-90% of cases. A combination of increased mucus production, cell debris and oedema lead to narrowing and obstruction of small airways.

Bronchiolitis usually develops following one to three days of common cold symptoms, including the following:

For the 40% of infants and young children in whom the infection progresses and the lower airways are affected, other symptoms may develop; including the following within 1-2 days (older children and many infants do not usually progress to any further symptoms):

Signs of severe bronchiolitis include retractions (sucking in of the skin around the ribs and the base of the throat), nasal flaring (when the nostrils enlarge during breathing), and grunting. The effort required to breathe faster and harder is tiring. In severe cases, a child may not be able to continue to breathe on his or her own.

Cyanosis may first be noticed in the finger and toenails; ear lobes; tip of the nose, lips, or tongue; and inside of the cheek. Any of these signs or symptoms requires immediate medical attention.

A child, who is grunting, appears to be tiring, stops breathing, or has cyanosis needs urgent medical attention.

The most common cause of bronchiolitis, respiratory syncytial virus (RSV), is transmitted through droplets that contain viral particles; these are exhaled into the air by breathing, coughing, or sneezing. These droplets can be carried on the hands, where they survive and can spread infection for several hours. If someone with RSV on his or her hands touches a child’s eye, nose, or mouth, the virus can infect the child. Adults infected with RSV can easily transmit the virus to the child.

A child with bronchiolitis should be kept away from other infants and individuals susceptible to severe respiratory infection (e.g., those with chronic heart or lung diseases, those with a weakened immune system) until the wheezing and fever are gone.

Complications of severe bronchiolitis may include:

If these occur, your child may need hospitalisation. Severe respiratory failure may require insertion of a tube into the trachea (intubation) to assist the child’s breathing until the infection is brought under control.

If your infant was born prematurely, has a heart or lung condition, or has a compromised immune system, watch closely for early signs of bronchiolitis. The infection may rapidly become severe, and signs and symptoms of the underlying condition may become worse. In such cases, your child will usually need hospitalisation to monitor his or her health and provide any necessary care.

Infrequently, bronchiolitis is accompanied by another lung infection such as bacterial pneumonia, which is treated separately. Reinfections with RSV after the initial episode may occur but typically aren’t as severe. Repeated episodes of bronchiolitis may precede the development of asthma later in life, but the relationship between the two conditions is unclear. 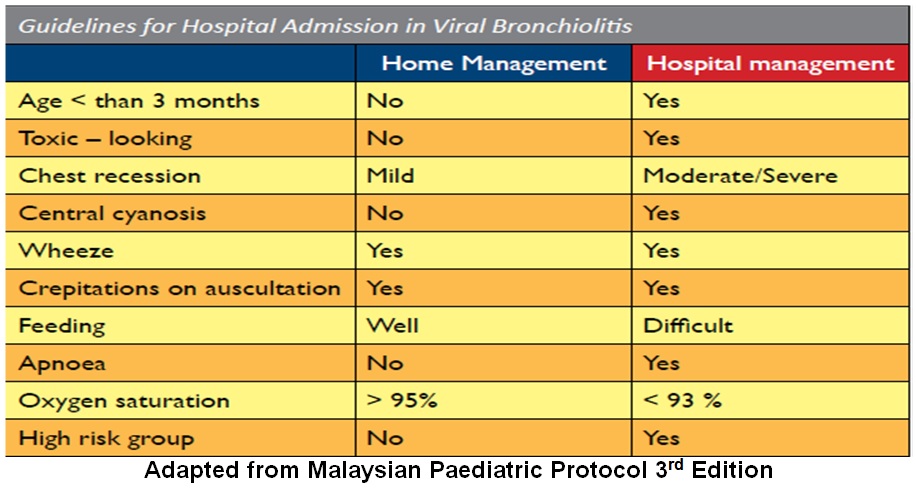 The best treatment for most kids is time to recover and plenty of fluids. Making sure a child drinks enough fluids can be a tricky task, however, because infants with bronchiolitis may not feel like drinking. They should be offered fluids in small amounts at more frequent intervals than usual.

To clear nasal congestion, try a bulb syringe and saline (saltwater) nose drops. This can be especially helpful just before feeding and sleeping. Sometimes, keeping the child in a slight upright position may help improve laboured breathing. Paracetamol can be given to reduce fever and make the child more comfortable. Be sure to follow appropriate dosing and interval of medication based on your child’s weight.

Hospital referral is suggested where there is:

The threshold for admission should be lower in those with significant comorbidities, premature infants and those under 3 months old.

There are several ways to prevent severe bronchiolitis: